The voting to become the next World Boxing News Fighter of the Year following Manny Pacquiao has gone from a two-horse race to a potential four-way battle overnight.

Over the last 24 hours, some four thousand ballots have seen the lead held by lightweight king Teofimo Lopez remain intact. What’s happening behind it is a very different story.

Four-weight ruler Canelo Alvarez had been out on his own in second place until a flood of support for unified welterweight champion Errol Spence Jr and Lopez rival Gervonta Davis.

A current simultaneous two-division belt-holder, Davis enjoyed a breakout win on Pay Per View against Leo Santa Cruz in 2020.

Spence, known as ‘The Truth,’ cemented his reputation as a pound for pound star by defeating Danny Garcia.

The man to take hold of the trophy from Manny Pacquiao is certainly not a cut and dried affair.

Please note that heavyweight champion Tyson Fury was not included after consultation with promoter Frank Warren.

Firstly, the current undisputed lightweight champion, Teofimo Lopez, enjoyed a breakout year in the pound for pound rankings after defeating Vasyl Lomachenko. Lopez is already being linked to huge fights at 135 against Ryan Garcia, Devin Haney, and Gervonta Davis in 2021.

The unified welterweight ruler, Errol Spence, defeated Danny Garcia after recovering from a life-threatening car accident in late 2019. Spence answered questions on whether he was fully recovered unequivocally in November.

A former pound for pound number one, Roman Gonzalez, was written off when losing versus Srisaket Sor Rungvisai. Dusting himself down, ‘Chocolatito’ returned fire. He’s now a world champion again and aiming to break back into the top ten with a victory over Juan Estrada in 2021.

Now a three-belt champion at 154 pounds, Jermell Charlo is another fighter who was forced to come back from a setback. Charlo added two more championships to his haul when defeating Jeison Rosario earlier this year in sharing a Pay Per View with his brother Jermall.

Cementing his place as the best fighter on the planet in December, Canelo Alvarez has the best resume. He commands the most money and certainly gets the highest ratings. Canelo became a four-weight world champion when dominating Callum Smith in Texas to win yet another lineal title.

Making his Pay Per View debut in 2020, Gervonta Davis defeated Leo Santa Cruz in a breakout performance for the Floyd Mayweather protege. Next year promises to be even bigger for Davis should he land a possible two-fight saga with fellow-nominee Teofimo Lopez. 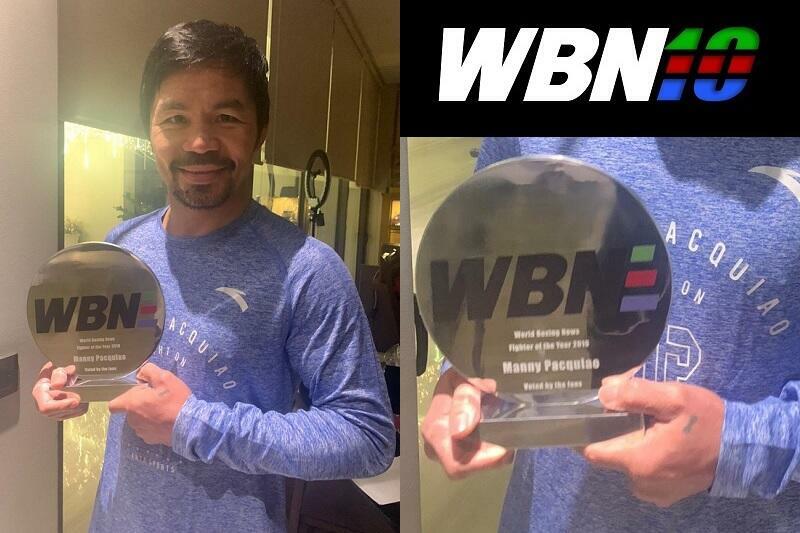 FIGHTER OF THE YEAR

Therefore, voting will run for almost a month until January 18th.

Manny Pacquiao took the trophy in 2019 and received the prize late due to the pandemic.

The Filipino Senator won for his two victories in 2019. Firstly, he beat Adrien Broner in January 2019 and then Keith Thurman over the summer.

Pacquiao is expected to be back in the ring by April 2021 and is planning a big return.