It’s official, former world champion Nathan Cleverly has the most bizarre Instagram account any boxer has ever, or maybe ever will possess in existence.

Firstly, no sooner had World Boxing News pointed out that Cleverly no longer posts on his keenly-followed Twitter account since a summer rant in 2018, did we discover his active Instagram.

Let me tell you this. It’s a must-follow for the zaniness alone.

‘Clev’ has turned into something of an extrovert in retirement and has some strong views not suitable for parental guidance viewing.

The staunch Welshman has been continually posting since leaving Twitter behind after unfollowing every single one of his boxing friends and acquaintances.

These days, Cleverly – who says he’s been to rehab – only follows a religious ‘Faith in God’ account as the ex-light heavyweight now says he is ‘born again’ and that of his girlfriend Katarina.

Cleverly is somewhat going under the radar on thirteen thousand seven hundred followers, having offered over 600 enlightening posts to date.

His first post dates back to 2014, when he was still competing, and contains the usual posts regarding his career and downtime. 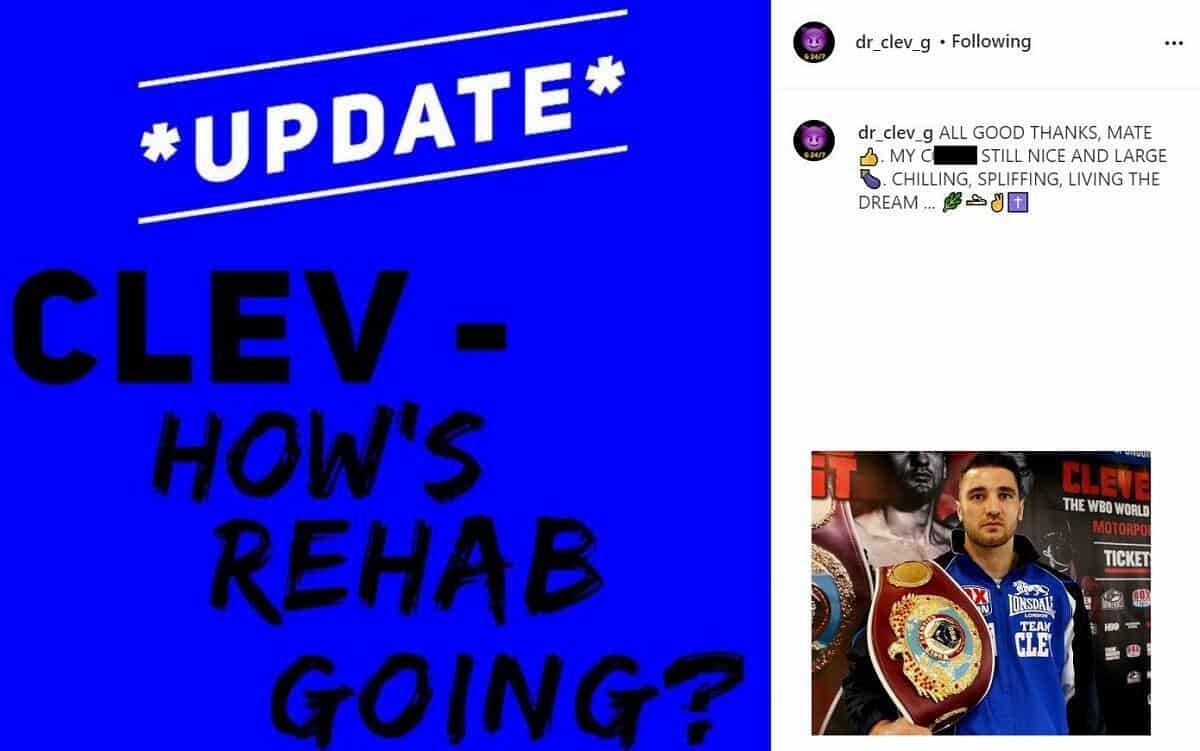 A mere sixteen Instagrams cover the last three years of his stint in the sport, though. Retiring in 2017 after a career-high purse against Badou Jack, Cleverly then took a step back.

Posting sparingly until 2019, Cleverly then began reflecting on his career and sharing his highlights – as any retiree would do at this stage.

Then in the summer of 2019, a year on from his famous Twitter rants WBN has covered on more than one occasion, Clev went into overdrive.

Partying and wild ways were now the new post of choice as Cleverly declared in June 2019, ‘I LOVE BEING A W—–!’

Boxing pictures were exchanged for life pictures of times with his dog as Cleverly seemed to come to terms with the fact he’ll never fight again.

But that block capitals offering seemed to be the start of a very different kind of musing from Cleverly on the social media site.

Now adopting his Twitter persona – Cleverly chose to write down a post on paper stating ‘I LOVE BEING A C—!’

That was just the tip of the iceberg.

Sandwiched in between the Welsh National Anthem were posts like ‘F— the GYM’ and videos of his backside. It was clear by then Cleverly was moving in a very different direction.

The odd boxing post now came with a new side to Clev on Instagram as the ‘G’ man began to come to the fore.

‘Happy Xmas, you bunch of c—-!’ came along as the bizarre ‘G’ man pushed forward more and more often.

By December 2019, religion became more dominant for Cleverly as his new girlfriend also made her first appearance. Cleverly was clearly living his best life.

Reiterating that he was ‘the hardest’ as he did on Twitter, ‘Clev the G’ seemingly took over the account, and many friends began to worry about his state of mind.

Labeling himself ‘The Alpha Male’ and the ‘King of the Jungle,’ Cleverly ramped up calling his followers names in R-rated rants.

Nearly every post was then greeted with his followers asking if he was okay as Clev laid into them with ‘Losers’ and ‘pussies’ taunts.

He then turned against women, even though, by now, his relationship with Katarina was obviously blossoming.

The odd homophobic slur, talking about his penis, and slating women who cheat became evident in the New Year of 2020 as Cleverly clearly held suspicion about who he could trust. 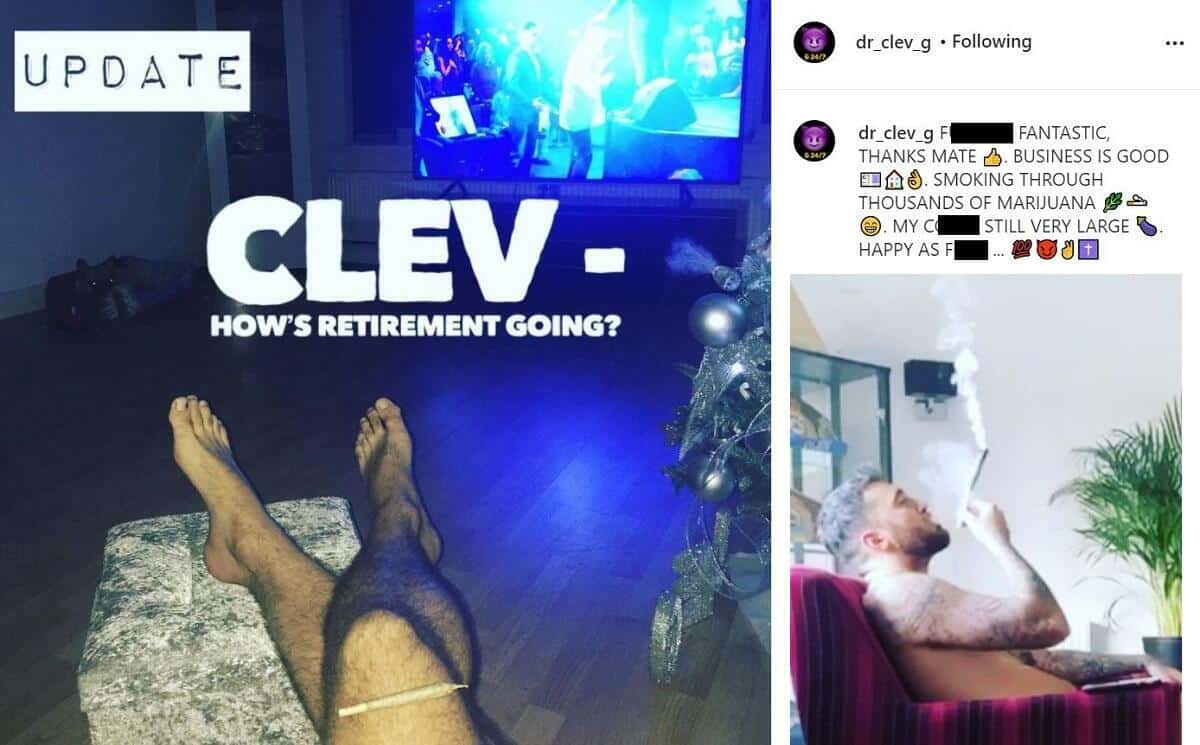 Into 2020 and Cleverly has adopted a ‘have fun before you’re dead’ attitude and obviously doesn’t give two f—- who he offends. He’s harboring some extreme emotions and clearly letting them loose on Instagram.

Over the past few months, Cleverly has taken it to the extreme. Posting several nude photos and making it no secret that he’s smoking enough weed to keep Mike Tyson happy, Cleverly is certainly living up to his ‘G’ persona.

‘The less you give a f—, the more the world respects you’ has become Cleverly’s mantra. But where his head is currently at, it would be good to know for those concerned.

Boxing is now well and truly off the menu regarding Cleverly, who calls the sport ‘a mug’s game’ and says ‘the people in it are s—!’

Women are the ‘ugliest creatures on earth’ according to Clev. C– slu– and f—ing wh—- into the bargain. The G-man has no problem making portraying his feelings.

Bragging about his $500,000 earnings for the Jack fight, smoking the biggest doobies, and preaching to men to stop being ‘pussies’ is regular for Cleverly at the moment.

He’s even turned on his fellow Welshmen.

In Clev’s new world, he’s the hardest, smartest person alive, and there’s a lot wrong with the rest of the planet.

Hopefully, Nathan Cleverly is just joking around, and his mental state is in as good a shape as his fitness.

It would certainly be good to find out for sure at some point.