Vasyl Lomachenko has made stunning accusations against the United States judging system after losing his top tier boxing status to Teofimo Lopez in October.

The pound for pound star, who won the WBN Fighter of the Year Award in 2017, missed out on the chance to become undisputed at lightweight.

Lopez did more than enough to claim the night’s decision, with World Boxing News scoring the contest 116-112 in favor of the home fighter.

“If we counted strictly by the book, the scorecards would be different,” pointed out the multi-weight champion.

“I took one round for the first half of the fight and five rounds for the second one, namely rounds seven to eleven.

“They knew that the possibility of a knockout from my side was around twenty percent. What does it say? It’s about being bribed. There was nothing about honest judging.” 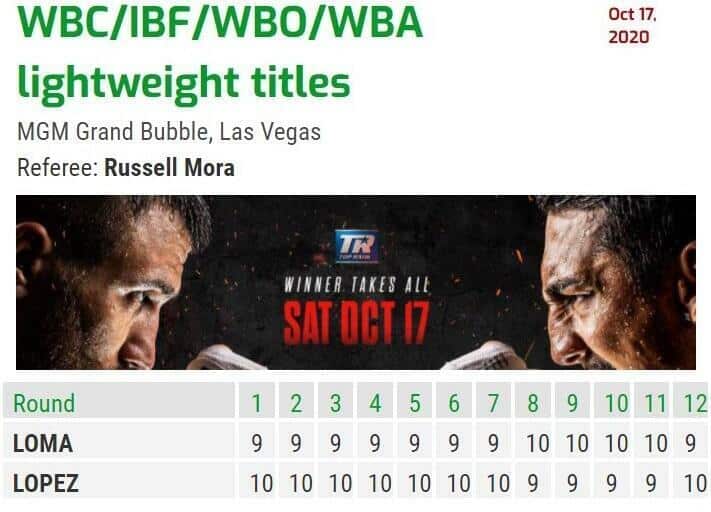 Following the triumph, Lopez has become a huge star in America and is currently being linked to massive Pay Per Views against Gervonta Davis, Ryan Garcia, and Devin Haney.

The possibility of a rematch has hardly been mentioned by Top Rank supremo Bob Arum, who seems content with the result as it stood.

As with all four sanctioning bodies involved. There’s nothing to suggest that Lomachenko was robbed in any way, shape or form.

US promoter Lou DiBella reacted strongly when airing his opinion on the matter after witnessing the interview.

He said: “This interview is disturbing. Loma didn’t win. The fight shouldn’t have been a draw. Baseless allegations of bribery don’t fly.

“Losing without sportsmanship blows. But whining like a little crybaby sounds like s*** in any language,” added DiBella.

Where Lomachenko goes from here is an unknown quantity. The consensus is a move back down to super-featherweight would suffice.

A run at the undisputed crown in the lower category said his ideal weight seems to correct move for Lomachenko moving forward.

The nature of Lomacchenko’s claims may not have done his chances of a return any favors at all, though.