Alvarez, the solid seasoned Mexican with every confidence of victory going up against the younger lion from England who has tasted big success in the World Boxing Super Series.

It’s no secret that Smith is a huge underdog. But judging by the sheer height variation, Canelo will at least have some trouble catching Smith flush on the chin.

When the pair lined up in Texas, the first thing that became apparent was how much advantage Smtih actually has.

Canelo stands 5ft 9ins. ‘Mundo’ is a lanky 6ft 3ins and an anomaly when it comes to the super-middleweight division.

Whatever the case may be, Canelo will certainly know he’s in for a fight when the first bell rings on Saturday night at the AT & T Stadium.

He said: “The height difference between Canelo and Smith is incredible, but we will have a great fight!”

Fighting at the venue for the second time in his storied career, Canelo beat Austin Trout there in April 2013.

It’s the fourth time the Mexican pound-for-pound king has boxed in Texas, having beaten Trout, James Kirkland, and Smith’s older brother Liam in the LoneStar State. 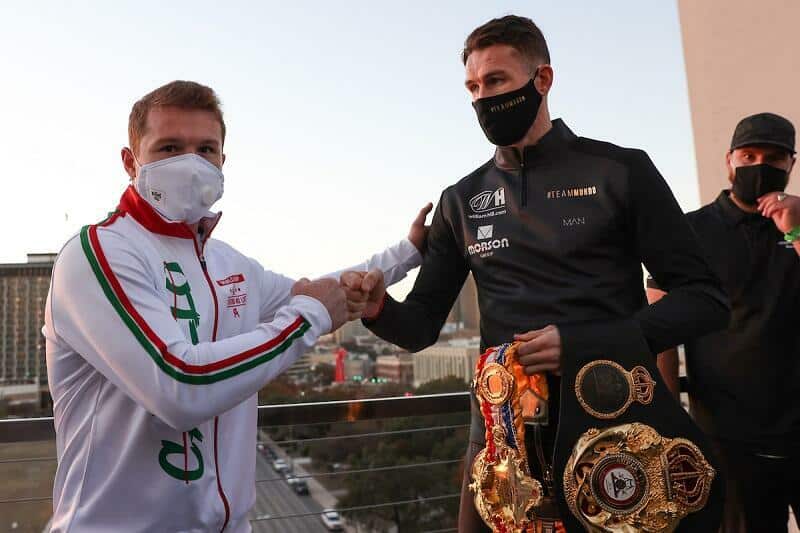 The pair had their first face-off and will follow that up on Wednesday with a media day. The day will include promo shoots, plus behind-the-scenes video and interviews.

It doesn’t stop there as far as media formalities go. The final press conference takes place on Thursday ahead of a huge night of action. It begins at 12noon (CT).

The presser will be streamed live on Matchroom Boxing’s YouTube channel.

The Canelo vs. Smith weigh-in will take place at 12noon ET on Friday afternoon.

Three titles will be on the line when the first bell goes as Canelo aims to cement his place as a bonafide four-weight world champion.

Smith puts his WBA 168 version on the line, alongside his lineal crown. The vacant World Boxing Council strap has since been added to the headline event.

Whoever comes out on top will be the top-rated super-middleweight on the planet. In Canelo’s case, still the number one boxer in the world.