Canelo Alvarez has the opportunity, through the World Boxing Council, to silence the critics who say he’s not a bonafide four-weight world champion.

Since winning the WBA ‘regular’ strap in December 2018, Canelo has been labeled a four-division king – wrongly in some quarters.

Canelo can now do so against Callum Smith after the Mexican superstar, Matchroom Boxing, DAZN, and the WBC agreed on the strap’s addition.

They said: “Matchroom and Canelo Promotions are delighted to announce that the WBC World Super-Middleweight title will be on the line when Canelo Alvarez and Callum Smith clash.

“Canelo (53-1-2 36 KOs) once again reaches for greatness. He challenges the WBA Super, lineal, and world number one rated super-middleweight Smith (27-0 19 KOs) in Texas.

“The addition of the WBC title adds more greatness and glamour to an already monstrous fight.”

On the pair’s credentials, it was pointed out that “Both men have won WBC straps before. Canelo winning belts at super-welterweight and middleweight.

“Smith, for his efforts, landed the WBC Diamond belt at 168lbs. Also, the WBSS trophy.” 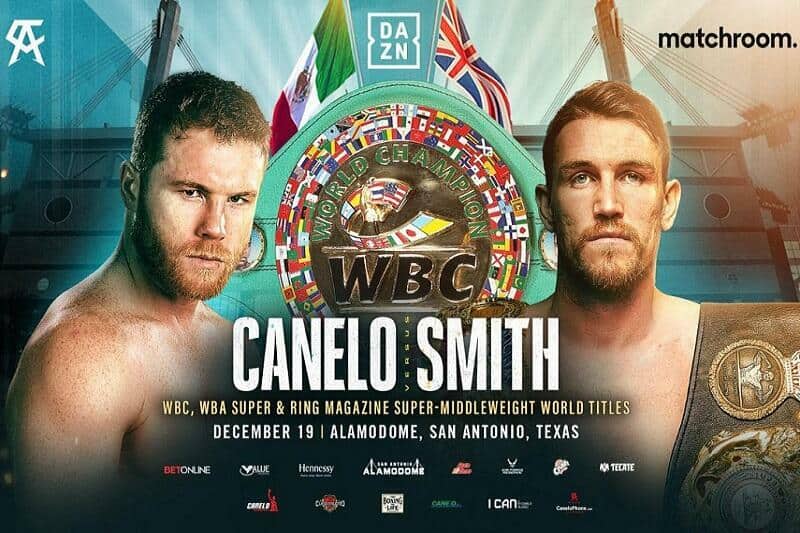 “The WBC is extremely proud to have such tremendous fight for the vacant WBC super-middleweight title,” he said.

“Canelo and Callum will give the world a superb closing of a difficult year. They will make fans from around the world celebrate with much entertainment and enjoyment.

“I would like to personally praise Avni Yildirim for his exemplary collaboration to make this a reality.”

“I am delighted that the winner of this fight will be crowned the WBC World champion at 168lbs,” said Hearn.

“Canelo Alvarez is the pound-for-pound best fighter on the planet. Callum Smith is the number one Super-Middleweight on the planet.

“Therefore, it is fitting for the winner to proudly wear the green and gold belt on December 19.”

It was confirmed that Canelo vs. Smith’s winner on December 19 would be ordered to face WBC #2 ranked Avni Yildrim within 90 days.

The WBC initially offered Yildirim the Canelo fight. Canelo chose to battle Smith instead, leading to this latest ruling.

Furthermore, Canelo’s favored win would cement his place as the pound for pound number one boxer on the planet.