As World Boxing News predicted, Canelo Alvarez, having been in the market for promoters last September, would hold some interest in joining old foe Floyd Mayweather.

Canelo battled Golden Boy promoter Oscar De La Hoya and streaming service DAZN in court over the fall. The Mexican cited the loss of earnings for 2020.

The relationship was beyond repair for those reasons mentioned earlier. The 30-year-old pound for pound king broke free, and rumors swirled he needed a new home.

Many thought that’s where Floyd Mayweather would come in.

The pair know each other well due to their dealings and have massive respect for each other as businessmen.

When Canelo fought Mayweather as a youngster in 2013, it was well-documented that he was looking to learn all he could from the former ruler to take his spot eventually.

Canelo lost the contest via (a contentious) split decision (which should have been unanimous to Floyd). But the general takeaway was that Canelo proved at a tender age that he had what it took to be Floyd’s successor.

Since then, the superstar has gone from strength to strength. 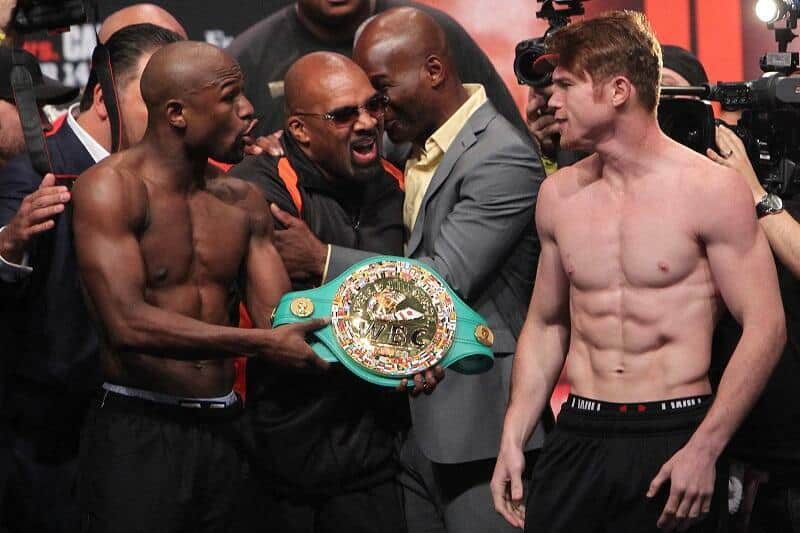 Re-joining DAZN to face Callum Smith next week still seems to be a temporary measure. Canelo has to campaign on Pay Per View and he knows it.

Therefore, what is perceived to be a one-fight rolling deal with DAZN can probably be severed at any moment by Canelo – if he chooses.

After the dust settles on his next fight, would this mean Mayweather and Canelo working well together? – In my eyes, yes, it would. It’s a perfect partnership.

The mutual admiration of being at the very top of the Pay Per View game is immediate for starters.

Mayweather could also get Canelo back on the paid platform at Showtime and potentially earning hundreds of millions of dollars per fight, rather than over a series of ten as with DAZN.

As previously pointed out by the American, Mayweather earned Canelo’s entire contract in one night against Manny Pacquiao. Again versus Conor McGregor.

There are levels to this PPV game, and Canelo needs the paid platform for a chance of breaking those kinds of records.

Being off the PPV scene has hurt Canelo since he’s been away. Add to that the fact he was never really settled at DAZN under Golden Boy.

Furthermore, problems arose from the off.

Mayweather would be well-advised to put in a bid for 2021 and do all he can to get Canelo on the books.

Canelo and Floyd. A partnership made in Showtime PPV heaven.