Anthony Joshua is in fight mode ahead of the Briton’s first fight on home soil in two years. AJ faces Kubrat Pulev on Saturday night, and tensions are certainly rising.

The unified heavyweight champion hit the scales on Friday, weighing a fraction over 240 pounds. The mark is a little under Joshua’s average for his last four bouts.

Pulev came in a tad under 240 pounds himself, tens pounds lighter than he did for victories over Bogdan Dino and Rydell Booker in 2019.

Once the formalities were out of the way, fight week niceties went firmly out of the window.

The Bulgarian began taunting Joshua and clearly got to the Londoner, who responded by edging towards Pulev, waving his finger and touching him on the shoulder. 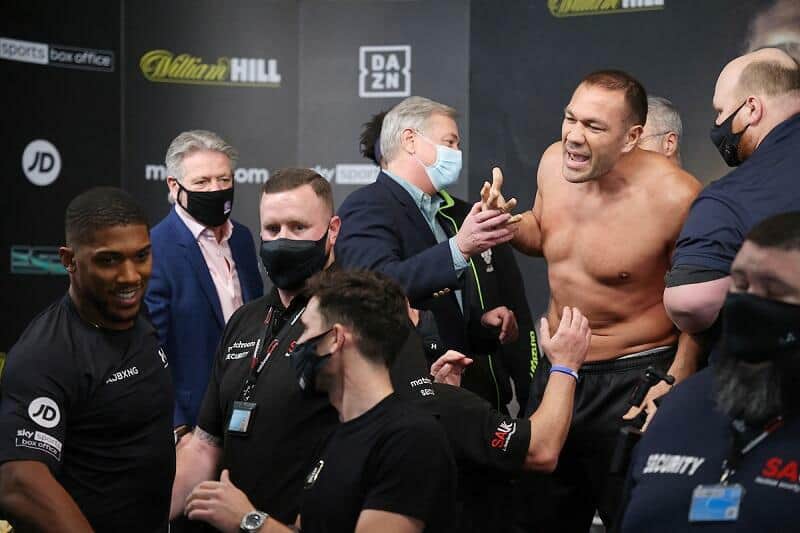 Bad blood has not been evident at all since the pair entered the fight venue. But with Pay Per Views to sell to the UK audience, Joshua and Pulev have ramped it up.

Their aggression comes on the back of plenty of jockeying for position inside ‘The Bubble’ coverage of Joshua during fight week.

Hopefully, all will be sorted out before the first bell.

Discussing the contest, Pulev’s co-manager Ivaylo Gotzev revealed the mindset of the IBF mandatory before his second-biggest career challenge.

A fifth-round loss to Wladimir Klitschko has to be confined to ancient history at the SSE Arena.

“This is everything he’s trained and lived for,” Ivaylo Gotzev told Marc Gatford via the MyBettingSites.co.uk blog. “His father wanted to have a son, and he wanted him to become heavyweight champion of the world.

“Here, we are fulfilling his father’s wishes.

“It really means a lot to Kubrat – it’s a family mission. But it’s wider than that too – he’s Bulgaria’s hero. He’s the man of the hour here.”

And what if he wins?

“Kubrat will be right in Fury’s face if he wins there would be a unification bout,” pointed out Gotzev. “There’s nothing more fun than challenging Tyson Fury, who comes with a whole lot of circus acts.

“AJ is a young man. There will be plenty of time for him to come back around when he gets beat.”