The World Boxing Council has released their first-ever bridgerweight rankings to lessen the gap between cruiserweight and the heavyweight division.

The nickname ‘bridgerweight’ was given to the new class in honor of a little boy named Bridger Walker, who saved his sister from a dog attack.

WBN speculated in November as to who may be involved when the introductory list was announced.

Former WBC heavyweight champion Deontay Wilder ruled himself out shortly after, but there are some similarities with the actual rankings released this week.

The expected inclusion of two cruiserweight belt holders hasn’t transpired as Mairis Briedis, and Ilunga Makabu refrained from applying for a ranking.

While Michael Hunter and Murat Gassiev seem to be concentrating on the top division. 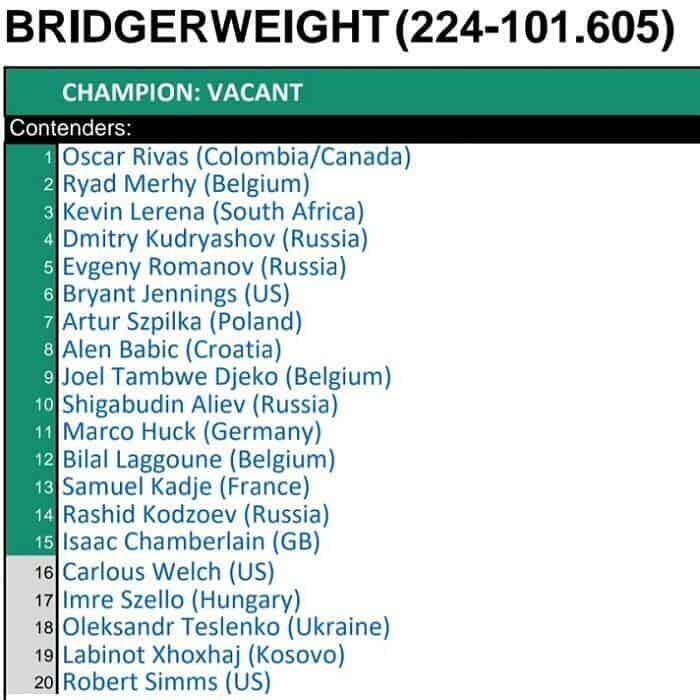 Oscar Rivas, one of the shoo-ins to campaign at super-cruiserweight, is number one, though.

Ryad Merhy of Belgium looks set to be in the opposite corner to Rivas when a vacant title clash is confirmed in the coming weeks.

Rivas vs. Merhy makes the most sense based on the Top 15.

With only twenty applications so far, many others are set to rubberstamp their interest in being part of the new movement.

More of the WBN list are likely to jump ship.

Some surprising names do appear at 224 pounds. Heavyweight knockout artist Evgeny Romanov is one of those.

At 15-0 with 11 stoppages and firmly on his way to a world title shot in the next two years, Romanov has decided on a detour.

Romanov, an amateur star and highly-talented fighter, is obviously looking to win a championship at the lower limit before aiming to become a two-weight ruler later on.

The WBC will make a formal confirmation on the vacant strap soon.