Deontay Wilder accused of being ‘weird’ and ‘sounding like Donald Trump’

Deontay Wilder has been accused of saying weird things and sounding like Donald Trump in the few months since his first defeat.

The former heavyweight champion was lambasted by Tyson Fury promoter Bob Arum when the Hall of Famer discussed Wilder’s chances of gaining a trilogy.

Arum has sat back and listened as Wilder went off about potential glove tampering. Plus, cornerman conspiracies after Fury stopped him in seven rounds last February.

Outlining whether Wilder deserved another shot at Fury, Arum compared ‘The Bronze Bomber’ to the 45th President of the United States.

“Deontay Wilder has said some weird, Trumpian things that make no sense,” Arum told Marc Gatford via the Betway Insider blog, “He sounded like Donald Trump!

“Fury took offense. And rightly so,” he added.

On who will give the final thumbs up on the third encounter getting over the line, Arum stated: “It’s up to Fury to decide.

“If Anthony Joshua is not available, Fury will have to decide whether to overlook his remarks. To go with a Wilder fight. That’s up to Tyson Fury.” 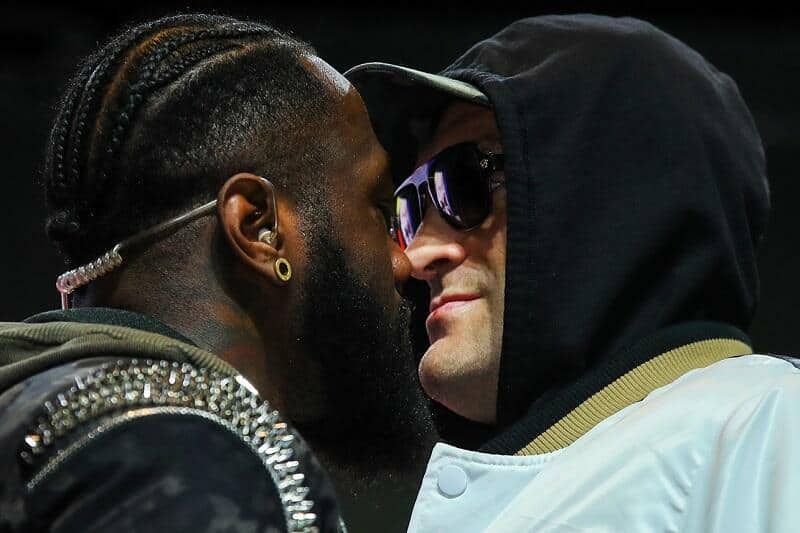 Previously, Arum had dismissed Wilder’s chances of winning a legal challenge due to Fury walking away from a scheduled fight in 2020.

‘The Gypsy King’ got sick of waiting and believes the contract for an agreement had expired. Arum agrees.

“The contract says Wilder’s rights ran out at the end of October. However, I believe that the contract clearly displays Wilder’s claim for a third fight.

“Wilder had some surgery. But the contract took care of that. There was a 90-day delay from the date of the proposed rematch in July. That has run out.

“But I think we’ll have a resolution on December 12. If Joshua is beaten. If he is then unavailable, I’ll have a talk with Tyson as to whether he wants to pursue a fight with Wilder,” he concluded.

Speak to a large contingent of American boxing fans are you will hear plenty of arguments as to why Wilder should be given a chance to level up the series.

A three-fight saga was always on the cards from day one. Besides, mud-slinging on hold, mediation should be able to crunch enough numbers to persuade both the price would be right.