Pay-per-view action on Spence vs. Garcia saw welterweight contender Josesito Lopez stop Francisco “Chia” Santana (25-9-1, 12 KOs) in the 10th and final round of their clash.

Lopez got off to a fast start in round one, connecting flush with a right hand and following up with hooks to the body to drop Santana midway through the round. Santana rose to his feet and was able to slow the ensuing follow-up attack from Lopez by landing multiple hooks in the round’s remaining moments.

“He got me with a flash knockdown in the first round,” said Santana. “He throws big wide shots, and he caught me on the top of my head and messed with my equilibrium for a second. I was able to get up and go back to work.”

Santana remained planted in the center of the ring for most of the fight, while Lopez was happy to circle the ring and pick his moments to come forward and attack in spurts. Lopez built up a big advantage in body punches landed, landing 49 to Santana’s three.

“Santana is one of the toughest fighters out there not holding a belt,” said Lopez. “I’m never in an easy fight, but I’m always going to give it everything I have. He knew that if he made a small mistake, he was going to pay. I made sure he paid, and I dictated the pace with my jab while utilizing good footwork against a tough fighter.”

In round nine, Lopez again dropped Santana, initially hurting him with a right hand late in the round to lead to the knockdown. Santana was able to make it through the round but was quickly dropped two times early in the tenth round, with referee Neal Young halting the fight 1:22 into the frame.

“It was a tough fight like I expected,” said Lopez. “I had to be smart in there, dictate the pace, and pick my shots. We managed to do what we set out to do. You can’t deny me anymore. If I’m not in with the best, I’m in with the toughest. I want one of the world champions or one of the top fighters.” 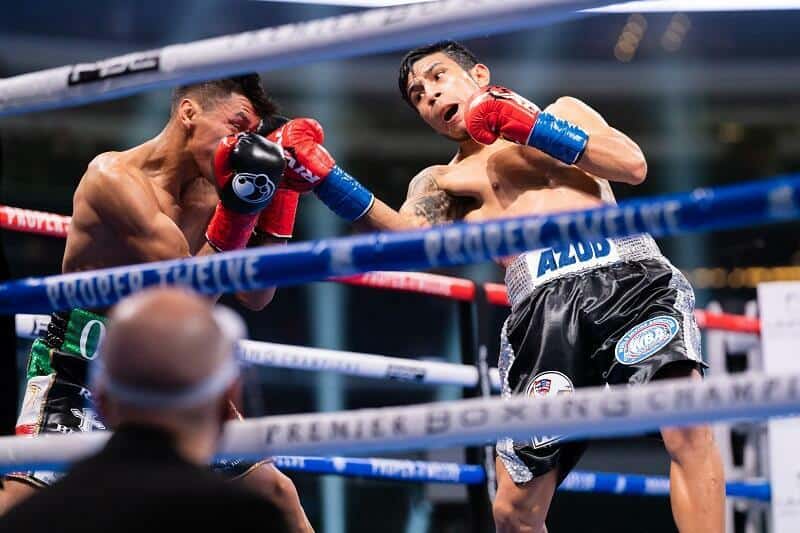 “I’m pleased about the win,” said Ramirez. “I worked very hard, and I’m thrilled to get the victory tonight. This was all the result of the hard work I put into the gym. The Montiel brothers trained me well, and it all paid off tonight. This was a last-minute opponent. I didn’t get to train specifically for him. But I’m getting better every day in the gym. That’s my main focus. I feel like I can beat anyone in this division.”

Ramirez controlled much of the early action, tagging Flores with left and right hooks, slowly damaging the area under Flores’ right eye. Flores showed a formidable body attack but was unable to slow his opponent’s offense.

Ramirez owned a 62 to 37 advantage in punches landed throughout the fight. Ramirez delivered a picture-perfect counter right hook in the opening moments of the fifth-round that immediately sent Flores to the canvas.

While Flores was able to get to his feet, referee Laurence Cole called an end to the bout 20 seconds into the round.

“I was having fun in there,” said Flores. “I thought I was doing better on the inside than the outside with him. We were putting on a good fight. He just caught me with one of those looping shots. It happens. It’s part of boxing. I’m a fighter, and I’ll be back.”

“I don’t want to get too far ahead of myself,” said Ramirez. “Whatever my team wants to do, we’ll talk about it. I want to become a world champion. I’ll be ready anywhere at any time.”