Social media has become a buzz of activity since Mike Tyson and Roy Jones Jr. made their heavyweight comebacks on Saturday night.

The two legends, fighting in their 50’s, did a good job keeping the fans entertained for eight rounds of two-minute action – for the most part.

Ending a draw, Tyson vs. Jones was a decent spectacle that allowed everyone to reminisce for one night. That’s where this story should end.

Not likely, though, as a spate of former boxers is now throwing their hats into the ring in what is certain to become a dangerous practice.

Past contenders in their 50’s or 60’s taking punches to the head cannot be taken lightly as to just how dangerous that is.

The chances of Dementia, Parkinson’s disease, and other diminishing illnesses will increase massively if these old age fighters continue to take blows in later life.

Yet, the competitor inside them has obviously seen an opportunity after the Mike Tyson fight.

All are over fifty except for Briggs, who is definitely still fit enough to compete with some in the sport today.

But barring Briggs and possibly the previously active Tarver at 52, there are considerable worries. Holyfield is 58, Nelson is 53, and has been out of action for a long time.

Bowe is massively out of shape, and McCrory is 56. If you note, their best days were a quarter of a century ago and more, a pretty sad state of affairs. 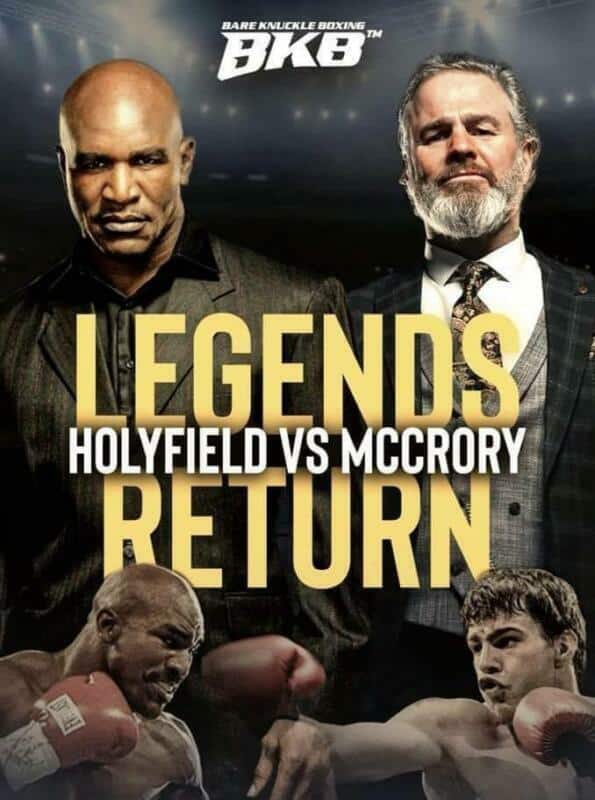 Bareknuckle Boxing put out a feeler on Tuesday regarding a possible battle between Holyfield and McCrory without gloves. I mean, that’s an unfathomable concept.

It’s bad enough they’d get hit with twelve ounces of leather on each hand.

Commenting on the Tyson fight over the weekend, McCrory said: “You could tell they’d worked hard, they concentrated in there. They didn’t pull the wool over anyone’s eyes and did the job.

Lennox Lewis, another to declare his interest in considering offers, also made a statement on the exhibition fight.

“I was asking, ‘what is Roy Jones doing in the heavyweight division,’ but he did well. He was a little tired because that’s not his weight class.

“I think someone else will challenge both of them now… and this one was a success, so I think they’ll probably do it again.”

Both men fought each other back in the day. But that’s exactly where those fights should remain. The dangers are too real, especially without headguards.

There’s a can of worms open somewhere, and someone firmly needs to close it before somebody gets hurt.

It’s all getting completely out of hand.