Sharahya-Taina Moreu fights on under the shadow of Johnny Tapia

The late, great Hall of Fame boxer Johnny Tapia played a significant role in the development of Albuquerque welterweight Sharahya-Taina Moreu, and the 3-division world champion remains a strong influence in her life.

During the COVID-19 pandemic she has been preparing to compete in the 2020 USA Boxing National Championships, December 5-12, at Shreveport Convention Center in Shreveport, Louisiana.

Tapia (shown below with his tattooed back to Moreu) helped Sharahya-Taina overcome the life-changing tragedy of her mother’s automobile accident. She was only eight at the time, laying on her mother after the accident, and the first out of the car and onto the highway asking for help.

“At first,” she spoke about her relationship with Tapia, “I was regretful and angry, getting into fights and on a bad path. I got into boxing at 12, took anger management, and became motivated.”

Tapia, who was a 2-time National Golden Gloves champion as an amateur, had a tremendous impact on Moreu’s life, something that will never leave her heart and soul.

“We became like family,” the 21-year-old explained. “At first, he (Johnny) didn’t like girls boxing, so he worked me really hard. I was a good basketball player and he kept telling me to go play basketball. But he became a big person in my life, I think, because I had lost my mother at such a young age.

“He helped me in and out of the ring in so many ways. Johnny Tapia was the nicest, most humble man I’ve ever met. We became family until the gym fell apart. He only coached me for about eight months, but he taught me that boxing defines you as a person. I feel safe in the ring. I’m a better person because of Johnny and boxing.” 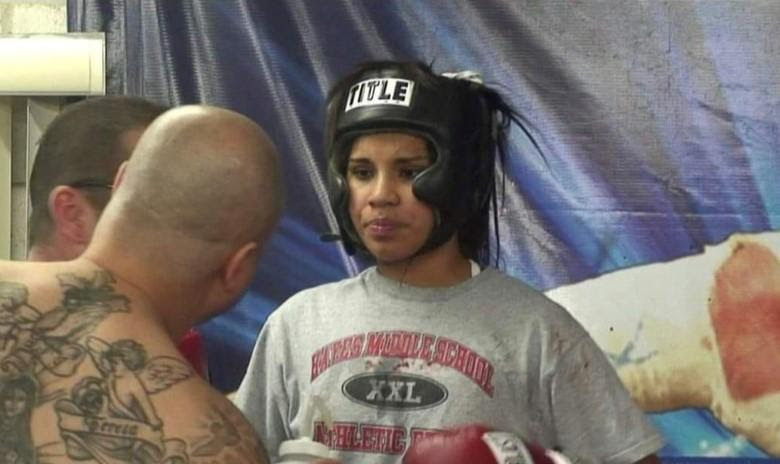 Training with her father/coach Yoruba Moreu during the pandemic, although it was challenging to find good sparring, hasn’t been as much of a problem as for others because her gym is in the backyard. She hasn’t been in a fight since last December’s Olympic Trials.

“I’m excited to get back in the ring because I’ve gone too long without competition,” Moreu looked ahead to Shreveport. “It’s definitely going to be different, because there are a bunch of new faces coming for the number one spot, which makes it fun and worthy to fight.”

Proud to represent the United States in competition, Sharahya-Taina is proud of her Native American and Puerto Rican heritage, and she’s taken up the cause fighting for women.

“I love to embrace both sides of my culture,” she commented, “representing my Acoma side from my mother and Taino lineage from the Puerto Rican blood in me, and that’s why my name is Sharahya-Taina. Every day is a fight for women. I’m just making it known and clear that we are here to stay. I’m not just fighting for myself. I’m also fighting for my family, ancestors and the next generation of females who choose to pick up a pair of gloves. The goal is not to be just a champ in the ring, but on the outside, too.”

Sharahya-Taina Moreu is a young woman on a mission. She hopes to compete in the 2024 Olympic Games in Paris, particularly with her younger brother if they both qualified to be, as she says, “an iconic brother/sister duo in Olympic boxing.”