A row erupted between Floyd Mayweather advisor and Mayweather Promotions CEO Leonard Ellerbe over the weekend regarding a huge Showtime deal.

Mayweather signed a massive deal with the network at the beginning of the 2010s. The six-bout contract was the biggest of the time – anywhere in the world.

On Friday, an article was written by Ring Magazine Editor Doug Fischer that caused Ellerbe and Showtime boss Stephen Espinoza to react.

Upon reading the article, Ellerbe took to social media to place his denial on record.

“Who told you Showtime lost money on most Floyd’s fights but stayed the course… that’s complete bs!” – Ellerbe stated.

Espinoza added: “SMH. It seems like everyone thinks they know more about Floyd’s SHO/CBS deal than the people who were actually involved.”

Commenting further to a tweet from a fan, Espinoza said: “Didn’t force Floyd into anything. Least of all a network deal.”

The Showtime supremo then reiterated his stance: “None of Floyd’s fights were loss leaders. Not a single one.”

Journalist Mark Ortega then posted a passage of Fischer’s article (below). 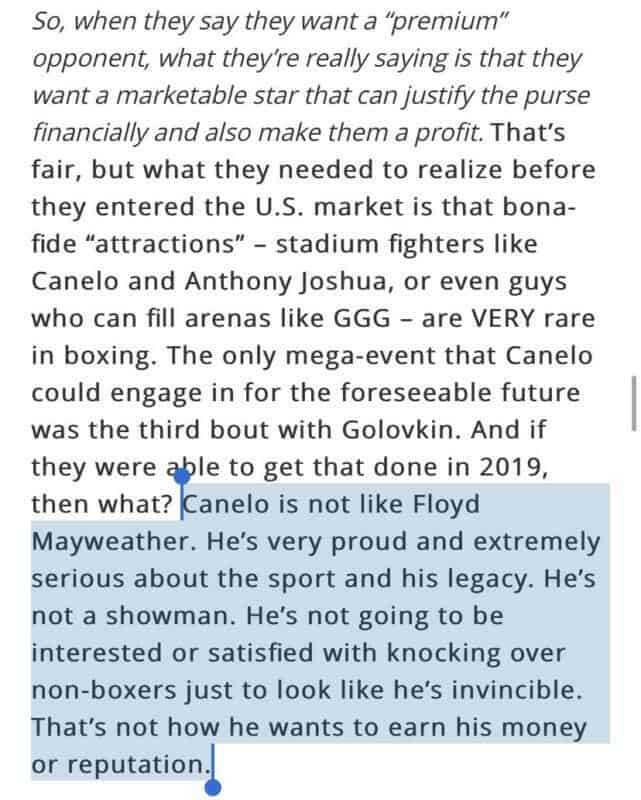 Ellerbe again had something to say on the matter after Ortega claimed there was some ‘hating’ going on.

“Lol, I peeped that also, but everyone is entitled to their opinion. You’re spot on, though. Honestly, we give zero fks!”

Fischer defended his corner. He pointed out: “I wasn’t taking a dig at Floyd or SHO.

“I presented several past PPV business examples in response to a question about Canelo and his situation with DAZN.

“Those with adequate reading comprehension can see that I presented SHO-Floyd as an example of a successful network-star union.

“The union was/is successful because the two sides “stayed the course” until MONSTER events could be made, which include Floyd vs. Canelo, Pacquiao, and McGregor.

“I wasn’t picking on Mayweather. I also mentioned Evander Holyfield and Manny Pacquiao’s past guarantees causing $ losses,” he added.

Numbers crunched and then injected into the argument via the replies, Fischer once again responded.

Fischer replied: “You did one side of the math. You left out the revenue splits and fighter payouts.”