As of yesterday, Vasyl Lomachenko vs Teófimo López is on! – The pair of lightweight stars both signed on the dotted line for a huge match-up later this year.

More information on the battle, which will be for all the marbles at 135 pounds, is set for release later on Tuesday.

The World Boxing Association aired their views after the clash finally made it over the line.

“Vasyl Lomachenko and Teófimo López signed the contracts for their World Boxing Association (WBA) Lightweight Super Championship fight, as announced by the company Top Rank, in charge of organizing the fight,” said the WBA.

“Top Rank showed pictures of both fighters signing the contracts through its social media and said they will release other details about the fight during this Tuesday. 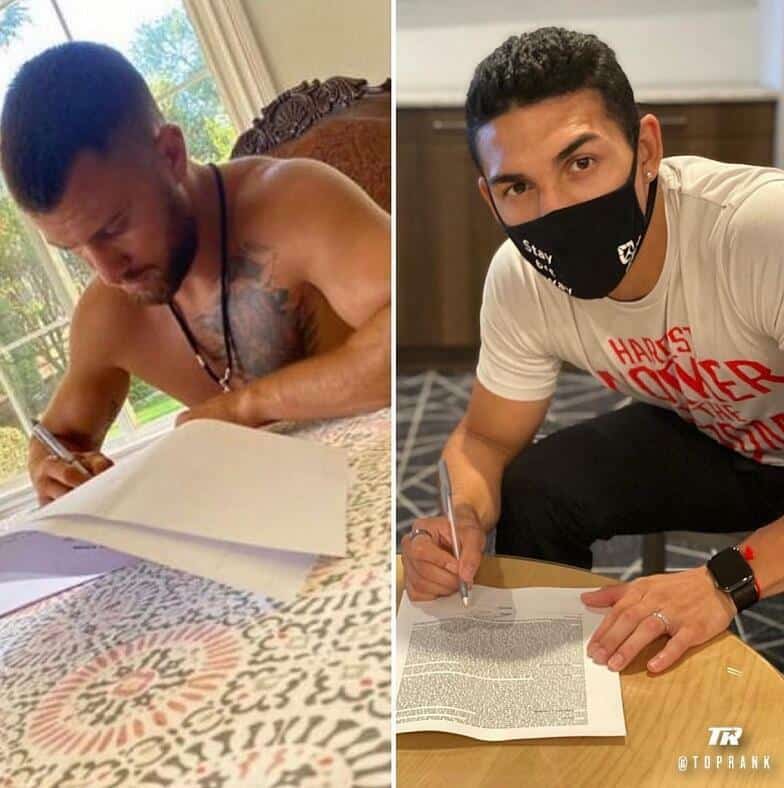 “Both fighters will enter the ring on October 17th at the MGM Grand in Las Vegas, for one of the most anticipated fights of the year.

“It brings face to face one of the best pound for pound boxers. As it is “Loma”, with a young man hungry for glory and also one of the strongest punchers in the category, as Teofimo.

“The fight will mean the Ukrainian boxer’s fourth defense of the title, who won his belt in May 2018 against Jorge Linares.

“He has beaten Jose Pedraza, Anthony Crolla, and Luke Campbell in a row since then.”

Teofimo holds the IBF version he took from Richard Commey and starts as an underdog against the great pound for pound Ukrainian.

Some see the fight as a changing of the guard. Although many believe Loma is just too much for the young star to handle.

We will see once the first bell goes, in what is the most anticipated fight of the year so far.

A date in October looks likely for the WBC, IBF, WBA, and WBO super-fight.