The current status of the 135-pound division has been the subject of much debate in boxing circles regarding World Boxing Council mandatories.

WBC chiefs have a lot to get through regarding what has become a red-hot weight class with many stars.

Recently, at the close of the World Boxing Council 58th Convention, a resolution was released.

There are five top-rated stars in the hunt for a crack at just one recognized green and gold belt.

At present, Vasyl Lomachenko is the universally acknowledged champion. This is despite the WBC elevating the Ukrainian to Franchise level.

Franchise Champion means Lomachenko can fight for any WBC title in any division at will. The accolade is only given to the very best.

Due to this reason, Devin Haney was handed was is now seen as the normal version of the strap. But it’s widely known that until Haney beats Lomachenko or the pound for pound star loses, the American won’t be fully seen as the full title-holder. 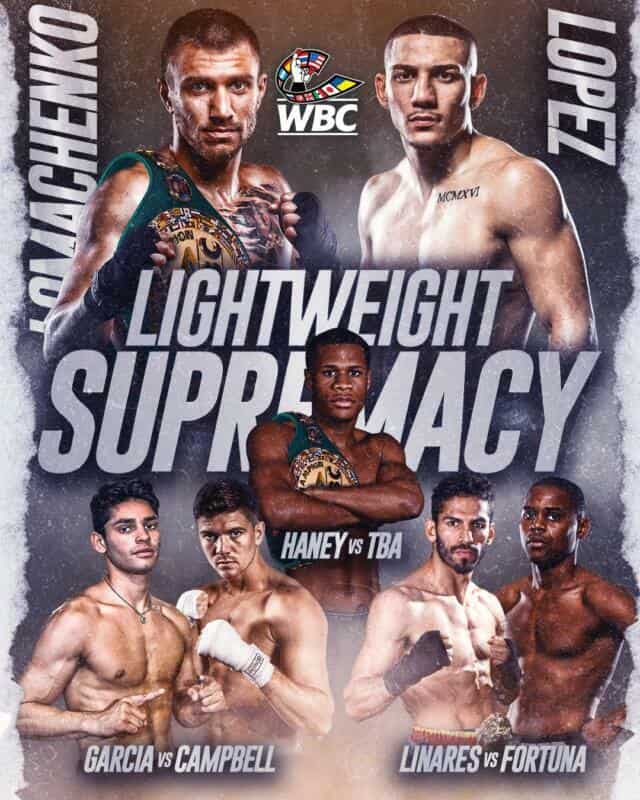 Therefore, Haney will almost certainly be looking to fight the winner of the forthcoming Lomachenko vs Teofimo Lopez unification.

It’s now been confirmed that the Franchise title will be on the line for Loma vs Lopez. This is not usually the case for just any old title match-up.

As for the mandatory contenders to Haney or Loma, well, they have been backing up of late.

This lead to the latest ruling from the WBC after a purse bid for Ryan Garcia vs Luke Campbell was called off.

The board of governors voted in favor of accepting Top Rank’s request that, if Teofimo Lopez wins the match, he be recognized as a franchise champion.

WBC Champion Devin Haney will have a voluntary defense.

Javier Fortuna will notify the WBC of his plans regarding their fight on August 28. He will have the unconditional support of the WBC.

Eliminatory fights will be held in Russia for the Silver title.