The destructive Williams – who is on a four-fight KO run at 160lbs – will defend his British title against his mandatory challenger Andrew Robinson (24-4-1) from Redditch. The 28-year-old, who is in mandatory position himself for the WBO world middleweight title held by Demetrius Andrade, will be seeking to maintain his reign of terror over the division while awaiting the purse bid process for his shot at the big prize.

Williams (22-2-1) won his title by defeating Mark Heffron in December 2018 and has defended once against Joe Mullender, while also picking up the WBC Silver title and WBO Intercontinental title with brutal stoppages of Karim Achour and Alantez Fox respectively.

Also on the card, Cacace (18-1) will defend his Lonsdale belt against Lyon Woodstock (12-2) in what is sure to be an all-action encounter. The Belfast man Cacace won the title last year by overcoming the then champion Sam Bowen in Birmingham, while former WBO European champion Woodstock from Leicester last saw action against Zelfa Barrett in 2019 when he was defeated on points in a Commonwealth title challenge.

JJ Metcalf (21-0) will defend his Commonwealth crown against former English champion Jack Flatley (16-1-1). The Liverpool man – also known as Kid Shamrock and firmly in the frame for British title honours – won his belt in June of last year by stopping former world title challenger Jason Welborn with a crippling left to the body in round eight.

Flatley, the ‘Quiet Storm’ from Bolton, became English champion by defeating Craig Morris in May 2019 before dropping his title on points to Harry Scarff in the September. The 25-year-old returned to winning ways by defeating Alastair Warren in December. 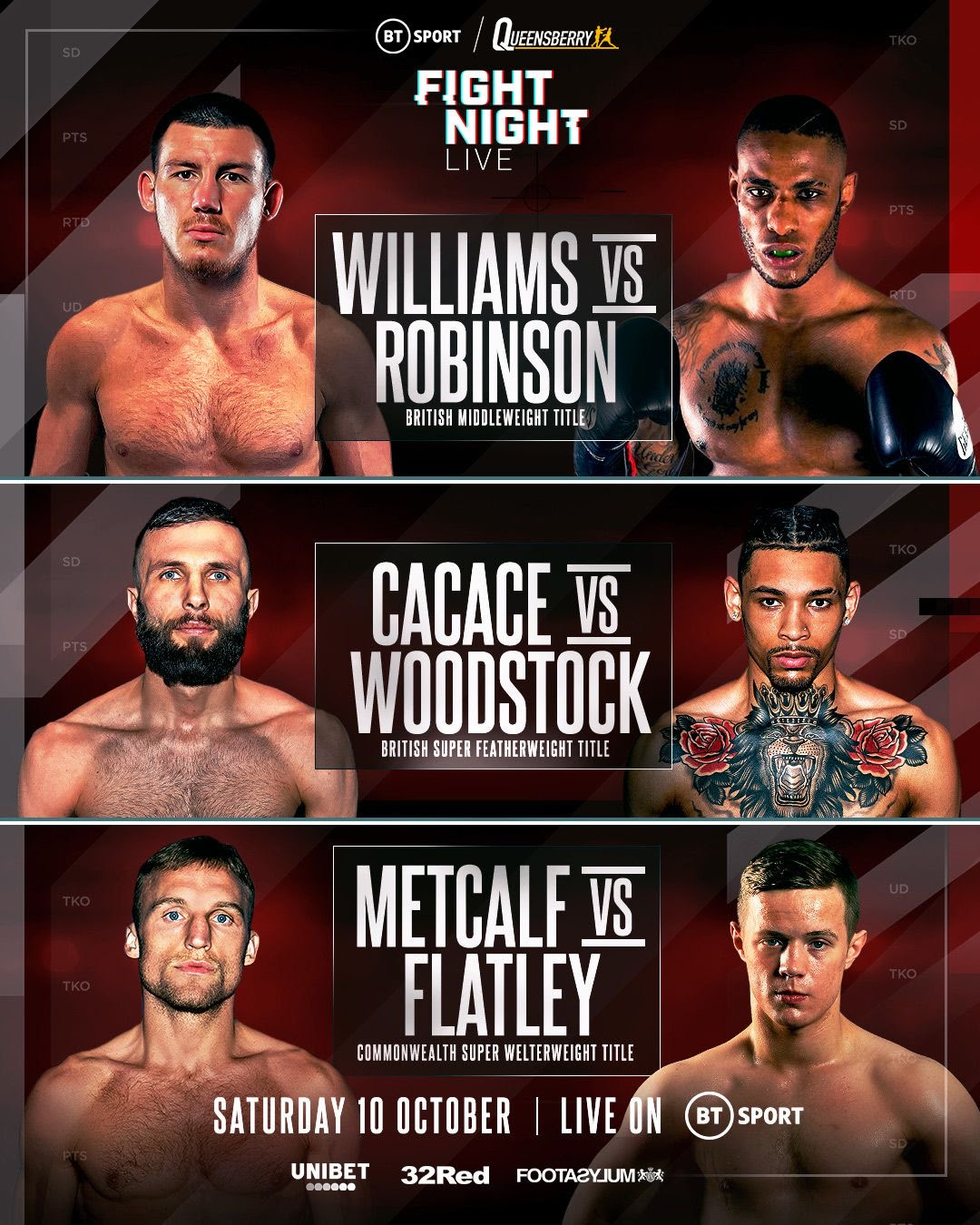 The title action is supplemented by three of the most exciting prospects in British boxing.

Thrilling bantamweight Dennis McCann will have his eighth professional fight after making a big statement last time out by stopping Brett Fidoe in the second round – only the second to halt Fidoe in 80 fights.

The Southampton snapper Ryan ‘The Piranha’ Garner (9-0) returns to business at super featherweight with a match against Birmingham’s experienced Sean Davies (14-14). He will be joined on the card by his teammate on the South Coast, Mark Chamberlain (6-0), who takes a step-up fight against Shaun Cooper (10-1) from Willenhall.

The 19-year-old welterweight Micky Burke jr completes the card with ‘The Gent’ taking part in his fourth professional fight.

Even though he has got bigger fish to fry in the pipeline, Williams insists he will approach his domestic defence against Robinson with his customary bludgeoning intent and went as far as to issue a health warning.

“I am obviously very, very confident and I know I will make a good job of him because I am training hard and I will turn up like I do for every other fight having left no stone unturned,” said the Welshman.

“I don’t think he is on my level but I am definitely not taking him lightly and I will approach the fight the way I do the others and that is with bad intentions.

“He is my mandatory and I think it is a dangerous fight because I think he could possibly get hurt. The referee and his team need to be careful and need to be looking after his health and interests because I genuinely think I could damage him.

“I am not sitting about waiting for the purse bids and when they said I could get out it was fantastic news for me. I was delighted and I just can’t wait to fight. I hoped to fight even earlier but now I am headlining and it is worth waiting another two weeks to have that top spot.

“I wanted to stay busy and they have given me what I asked for. Now it is up to me to produce the goods again.”

Hall of Fame promoter Frank Warren added: “This is another top show involving the top fighters we are delivering to the fans on BT Sport again.

“Liam Williams has blazed a trail through the middleweight division in a blistering fashion that has captured the imagination of the public. He is a big player now who is on the cusp of a world title shot that will be right in play once travel and crowd restrictions have been eased.

“He is still the British champion and Andrew Robinson is his mandatory challenger, so Liam has got genuine business to attend to on the night and I know it is a job he will be taking seriously.

“Anthony Cacace and Lyon Woodstock should be a real barnstormer and the winner of this one will be an excellent position to secure more big fights in what is a thriving super featherweight division. I am also looking forward to seeing JJ Metcalf back in action against Jack Flatley. JJ has been absent through injury and if he comes through this and retains his Commonwealth title there are massive fights in front of him on the domestic super welterweight front.

“I am also delighted to showcase three of the most captivating talents in the game in Dennis McCann, Mark Chamberlain and Ryan Garner on the same card. I am convinced in a few years’ time that these three will be competing for headline status on the big shows with major titles at stake.”