Frank Warren, Dillian Whyte get into it, insults fly as Eddie Hearn laughs

Promoter Frank Warren and heavyweight Dillian Whyte have begun a war of words on social media that could make anyone’s eyes begin to water.

The pair have been at each other’s throats with insults flying on both sides of the fence this week.

It came as Warren made post-fight comments on Whyte’s horrific knockout at the hands of Alexander Povetkin.

The Hall of Famer stated he had, ‘no desire to stick the boot in on a man when he is down’. But Whyte clearly didn’t see it that way.

Warren added: “What happened on Saturday is precisely why I was so keen on matching Dillian against Daniel Dubois.

“You didn’t need to study the form too closely to see this coming. Dillian was down late against Joseph Parker. The same against Oscar Rivas and now Povetkin.

“Add those to two massive struggles against Dereck Chisora and then match it to the pedigree of the No.1 in the world, Tyson Fury.” 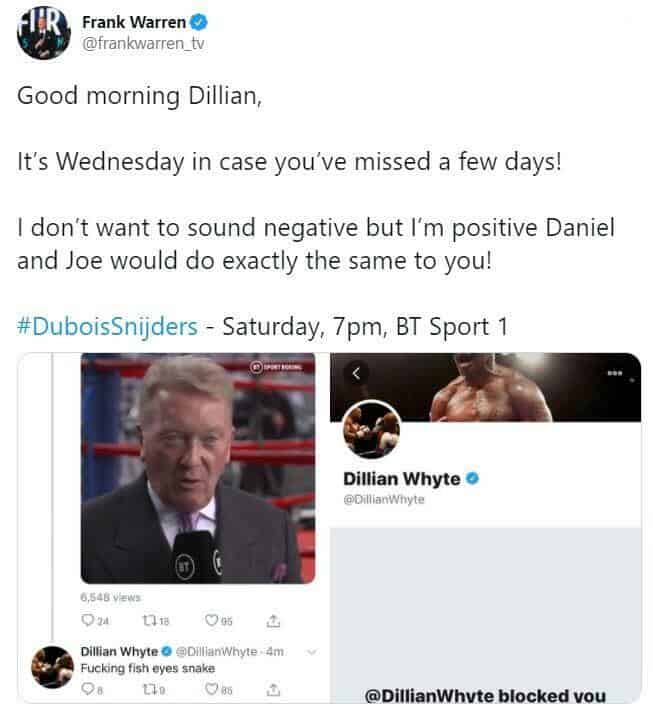 Whyte fired a silver bullet in Warren’s direction by stating: ‘F-ing Fish Eyes’ underneath an interview Warren gave on the performance.

‘The Body Snatcher’ then blocked Warren, at least on Twitter, before Warren responded: “Good morning Dillian,

“I don’t want to sound negative but I’m positive Daniel and Joe would do exactly the same to you!”

It then got considerably uglier.

Digging up ammunition from Warren’s past finances, Dillian Whyte said: “I may have been on my a— for a few seconds but you have been on your a— for years!”

Rival Eddie Hearn even posted in the comments to give another kick to Warren. 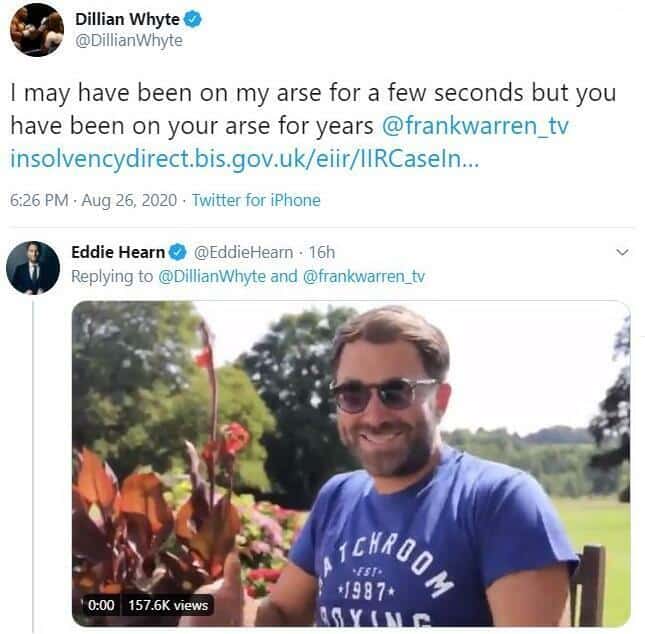 Concluding the argument, Warren explained what the situation was to his followers.

“Dillian, I’m more than good thanks. It’s on record I was defrauded of £millions in the early 2000s. A lot’s happened in the last 20 yrs and I’m more than fine.

“Now that’s cleared up, can you please clear up whether your B sample tested differently to your positive A sample?”

Now that’s cleared up, can you please clear up whether your B sample tested differently to your positive A sample? https://t.co/lnpXa0hk7S

Not a good look for any of those involved in what has turned into a petty argument after positive signs that Matchroom and Queensberry could work together.

That possibility now seems to be off the table as the rest of the boxing world tries to fathom how these playground antics seem to be going on for so long.

Hopefully, it can be quashed before negotiations open up for Tyson Fury vs Anthony Joshua. US handler Bob Arum has already said he’d handle talks with Hearn, though.