Dillian Whyte saw his World Boxing Council dream obliterated in a split-second as veteran Alexander Povetkin wiped him out with one punch.

Whyte was knocked out cold by Povetkin, as the Russian viciously halted his world heavyweight title ambitions in the finale of Matchroom Fight Camp in Brentwood, Essex.

Despite completely controlling the fight to that point, and flooring his opponent twice in the fourth round into the bargain, Whyte was smashed by a left uppercut in the fifth that ended his hopes in a flash.

The 32-year-old would have had a mandatory challenge of Tyson Fury’s WBC heavyweight championship finally enforced. A 1029-day wait could have been ended with a win but Whyte became the victim of a stunning come-from-behind victory.

In the aftermath, a surprised Povetkin was unsure how to take the victory.

Discussing being knocked down twice, the new WBC Diamond champion stated: “I didn’t feel that I would finish the fight like this. 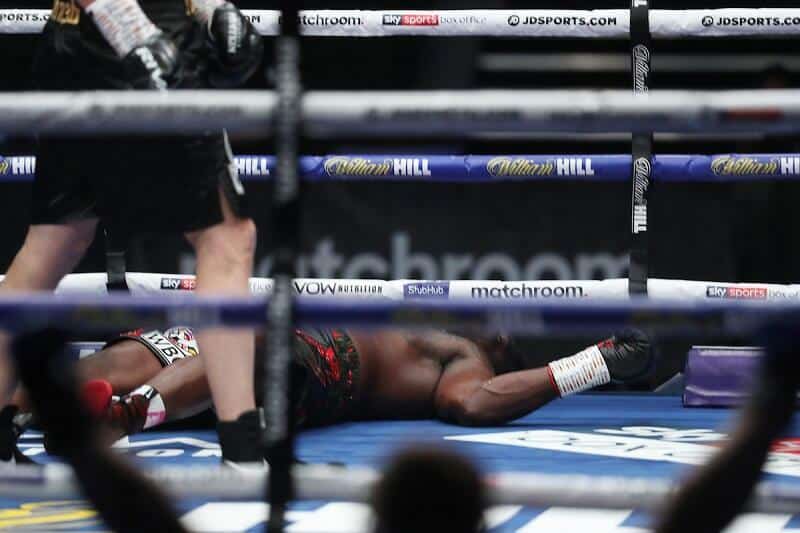 “I was pretty confident in the fourth round that, even though I went down twice, it was OK. It wasn’t too much damage.”

On landing the sweetest uppercut of his career, Povetkin added: “I was watching his fights. I was taking into account that he was missing uppercuts from the left and from the right.

“During my training, I was training on putting combinations around those shots. It was definitely my best punch.”

The ending could have been predicted as Whyte’s most recent performances have not been that of a number one contender.

Massively overweight for his last victory over Mariusz Wach, Whyte had struggled against Oscar Rivas, Joseph Parker, and even Dereck Chisora of late.

When the stakes were high, Whyte failed to rise to the occasion. He now needs a huge performance in a possible return in order to land a shot at the WBC by 2022.

A gut-check of the worst order, the 32-year-old Jamaican-born Brit has to go back to the drawing board to find that desire he displayed to become the top contender in the first place.