Advertisements
Home » Was it some dream? – Eddie Hearn stunned after heavyweight star is KO’d

Was it some dream? – Eddie Hearn stunned after heavyweight star is KO’d

Matchroom promoter Eddie Hearn has registered his disbelief as witnessing one of his top UK heavyweights get demolished, literally in his own back yard.

Hearn, as many UK fans who paid £19.95 to watch on Sky Box Office also did, watched on helplessly as Whyte’s world title dream was ended in a flash.

Dangerous veteran puncher Alexander Povetkin slammed an almighty uppercut onto Whyte’s chin and that was all she wrote.

It’s the second time in just over a year that one of Hearn’s top division stars was halted badly. The other, Anthony Joshua, was also present to see his old rival’s demise.

Whyte had Povetkin in the palm of his hand with two knockdowns in the previous round. But as Hearn stated post-fight, it was gone in the blink of an eye.

“I felt like I was in some dream. The fight was over, virtually,” pointed out Hearn. “Povetkin started well, Dillian Whyte was measuring up and had a great finish to the third round. 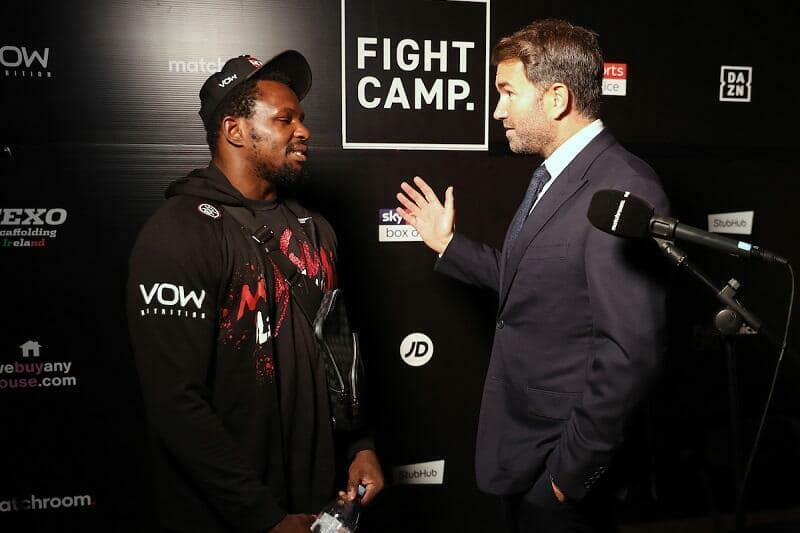 “Then he has two heavy knockdowns in the fourth round. I know I felt, and a lot of people felt, that it was over.

He continued: “Dillian Whyte was in total control of the fight, I really felt confident that he was about to end the fight. Was he complacent? Was it just great work from Alexander Povetkin?

“There’s that uppercut that some believe Whyte is susceptible to and Povetkin slipped right under and delivered it. Unbelievable. It is a shock.

A rematch is already being planned between Povetkin and Whyte before the end of the year.