Dillian Whyte has been the mandatory heavyweight title challenger for over a year, but research from bookmaker William Hill has revealed that he lacks the victories and stoppages to be considered a ‘successful title challenger’.

Whyte continues his quest for a WBC title fight when he meets Russian brawler Alexander Povetkin at Matchroom Fight Camp on 22nd August, and a victory could set up a title showdown with the winner of Tyson Fury and Deontay Wilder.

But after crunching the numbers behind each challenger that went on to win a heavyweight title over the past 20 years, the statistics show that the average contender has racked up 29 wins and 24 stoppages before going on to claim a heavyweight belt.

Whyte has only managed 27 wins and 18 stoppages in his career so far. 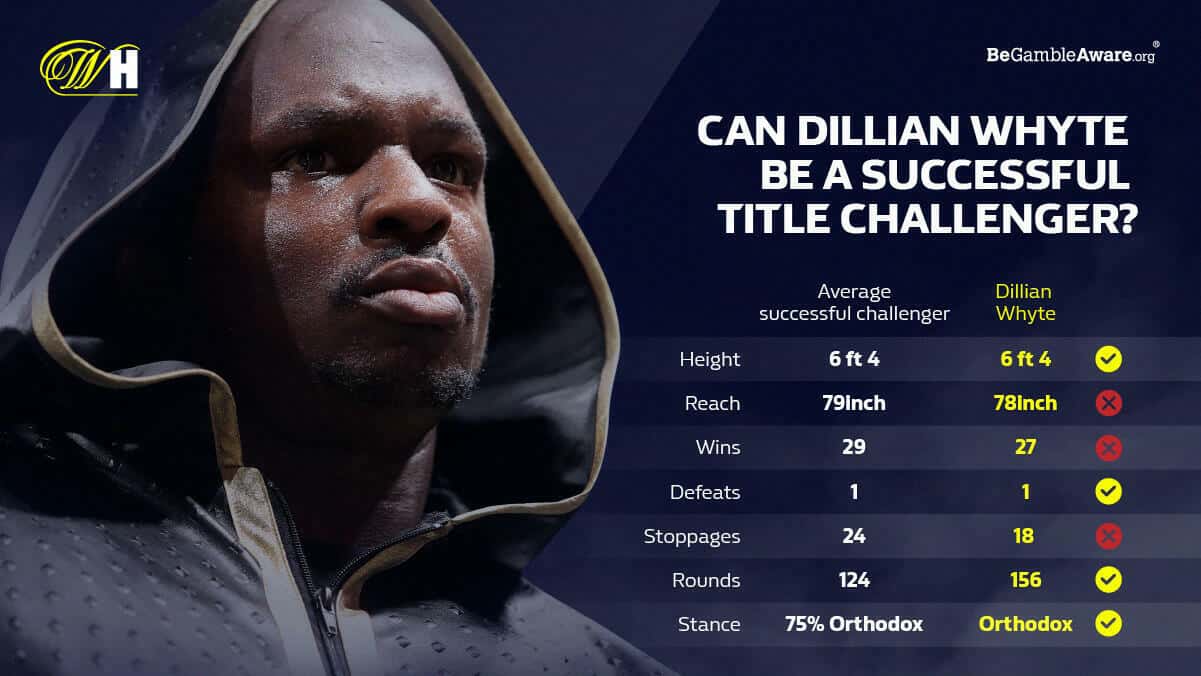 Whyte, however, will take comfort in the fact that other title challengers who fell below the average wins or stoppages that went on to claim a heavyweight championship include legendary British boxers Lennox Lewis (22 wins and 20 stoppages before becoming champion) and David Haye (22 wins and 21 stoppages), and Ukrainian fighter Vitali Klitschko (24 wins and 24 stoppages).

Whyte has also fought more rounds than the average successful title challenger – 156 compared to 124 – and has tasted just one defeat, which is the same as the average contender.

Tony Smith, Marketing Director at William Hill, said: “Dillian Whyte has had to jump through many hoops to cement his place as mandatory WBC title challenger, but the journey continues when he fights Alexander Povetkin this weekend at Matchroom Fight Camp. The victory means he will set up a fight with the WBC champion, so we’ve looked at the statistics behind the average boxer who has gone on to successfully win a title as challenger.

“Unfortunately for Whyte, he lacks in the wins and stoppages count for the average successful contender – his 27 wins and 18 stoppages are just short of the benchmark: 29 wins and 24 stoppages

“Whyte shouldn’t be too downbeat though, as the likes of Lennox Lewis, David Haye, and Vitali Klitschko all had fewer wins than he did before going on to claim a heavyweight belt.”