Back in July, World Boxing News opened an investigation into the whereabouts of any video containing the incident.

Taking place at Fantasy Springs ten years ago, Wilder was reportedly dropped for more than ten seconds and saved by the bell to avoid losing just his 13th bout.

WBN gained eye-witness accounts, plus references from Wilder himself and trainer Jay Deas, all of which don’t really shed any further light on the mystery.

As previously explained, several social media links to the video and photos are now dead. Whilst WBN had contacted Golden Boy, Fantasy Springs, and Mexican Television for footage.

Topped by Eloy Perez vs Dominic Salcido, Solo Boxeo grabbed the rights to broadcast the event in Mexico. WBN has since learned they only recorded the main event.

Fantasy Springs spokesman Michael Felci delved into the archives upon request by WBN. In the end, they could only come up with the photographs.

Golden Boy, who some fans have accused of ‘burying’ what would have been a damaging clip of Wilder, responded through Robert Diaz.

The GBP Vice President and Matchmaker could only push us in the right direction, where ultimately a dead-end came to fruition. 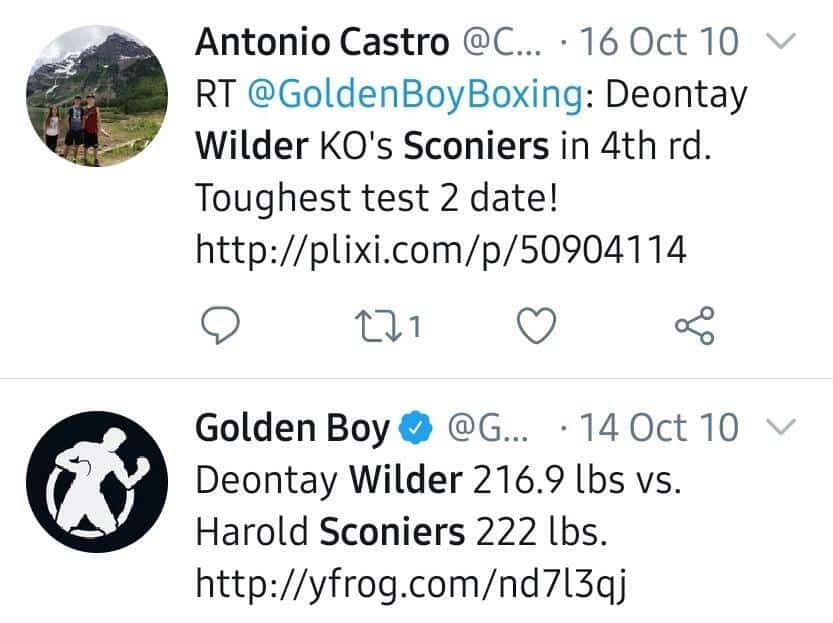 So what really happened that night?

Two men who were certainly there have made comments on the night in prior interviews.

Wilder himself said to The Opening Kickoff on WNSP-FM 105.5: “Early in my career, I got dropped. I got a rabbit punch in the back of the neck.

“When the punch happened instantly my neck started to swell. There was a knot back there. It was a black out-type of feeling.

Deas, who is also his co-manager alongside Shelly Finkel, stated to Tha Boxing Voice: “Harold Sconiers, who didn’t have a great record but had just knocked out Andre Purlette. He was forty wins an three losses in the fight before Deontay, so we knew he was a live guy.

“Deontay knocked him down two or three times and move in for the kill. Sconiers threw a punch and it landed kind of on the back of Deontay’s head. But it still counted.

“Deontay took it well, got up, and stopped it in the next round. So it can happen to anybody. It’s just one of those things in boxing.

“Behind the head, but hey, it’s boxing. What are you going to do, complain? You got to get back up and you got to do the job.”

Deontay Wilder did so in the fourth after dropping Sconiers four times. But that fact still can’t deflect from what really went down.

Maybe we will never know. Or maybe there’s someone out there with grainy footage of the knockdown.

Furthermore, if you were in the crowd that night on October 15th, 2010 at Fantasy Springs in California, please contact Phil Jay at WBN. ([email protected]).