Swedish heavyweight Otto Wallin is on his way back to the ring this week almost a year on from pushing Tyson Fury all the way in Las Vegas.

The dangerous southpaw cut Fury badly during their MGM Grand battle, with many believing the fight should have been stopped.

Jorge Capetillo worked wonders in the corner and was rewarded by Fury for potentially saving his career.

Wallin now hopes to build on his enhanced reputation by taking out fellow-COVID-19 recoverer Travis Kauffman.

The pair collide this weekend on Showtime in a top division battle with much at stake.

Should Wallin overcome Kauffman, there are plenty of big names in the 29-year-old’s crosshairs for 2021.

“It feels great that I am finally going to fight,” said Wallin. “It’s almost been a year since my last fight.

“It is great to train, but I do not want to train all the time. I want to fight. I have been on lockdown in New York, so finally, I get some action.

“It has been quite different (during the lockdown). In the spring, when New York was shut down, we were training a lot in my apartment and in Central Park.

“I pretty much had to build a gym in my apartment. I bought a bike, a bench press, and some other weights. Then for the last couple of months, we had a private gym that we were working out of. 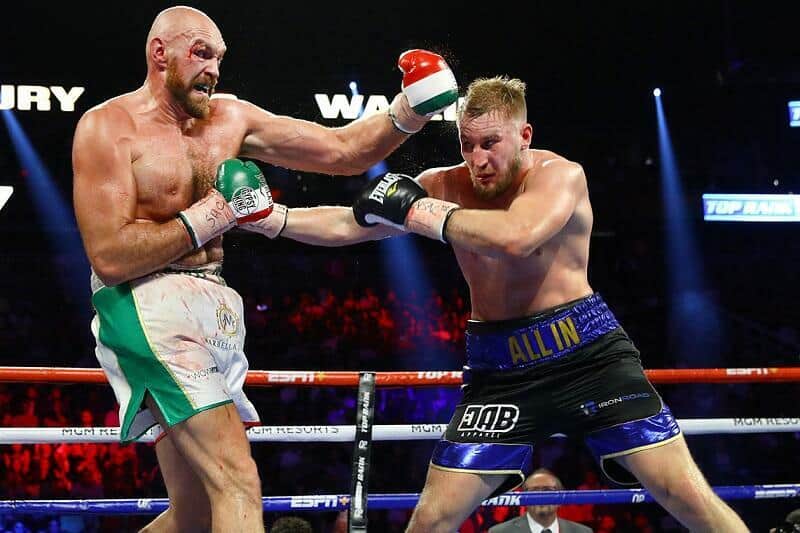 “It is not so much about proving that the Fury performance wasn’t a fluke. It is about me going out there and being myself and beating Kauffman.

“He’s a good fighter. So I have to be alert at all times. But I feel like I am just a better fighter so as long as I go out and perform. No one will be saying it is a fluke and that I am for real.

“Hopefully I will get a title shot soon. I did better against Fury than anybody has, so you can take that and see that I am one of the top guys.

“I think that I am one of the top guys. I’m happy to be fighting again so I can show that. The champions are tied up with themselves, so we will see what happens. But I feel like after the Fury fight people know that I am in that mix.

“Fury seems to always be calling people out, but he never mentions my name.

“I would like to fight the champions, of course. That is Fury and Anthony Joshua. Deontay Wilder is a top heavyweight guy, so that is an option when he comes back. But a Fury rematch or a fight with Joshua is what I really want.

“It is important for me to take care of Kauffman and stay busy, then get back in the ring quickly.”

“I’ve been watching the Fury fight, and I have been studying it. Being in there with Fury, and trading rounds with the champion like that, there is nothing better.

“I need the experience, so that was great for me. I’m sure I learned a lot that I do not even know of yet. I feel like improved after that fight, but we always need to improve.”