The widow of former world heavyweight champion Tommy Morrison has filed a motion to test newly discovered preserved DNA belonging to her husband for traces of HIV.

Trish Morrison is fighting hard to prove ‘The Duke’ was never HIV positive after a previous test uncovered the late fighter didn’t have the virus.

Firstly, upon his death in 2013, Morrison underwent an autopsy which revealed no HIV presence in his system. Trish has since made it her number one goal to clear Tommy’s name.

Secondly, several motions have been filed by Trish. This latest gives the defendants in this case until August 18 to respond.

Morrison’s DNA could be the all-important factor in gaining closure for Trish. It comes after Tommy lost his career due to a ‘false-positive’ back in the mid-1990s.

Part of the motion filed, on the action that Trish wants to be taken, reads as follows:

1. Access to biological evidence for DNA/HIV testing is necessary to ensure the ESTATE of Tommy Morrison’s rights to due process, effective assistance from the Judicial system. To gain a reliable outcome as guaranteed by the Fifth, Sixth, Eighth, and Fourteenth Amendments to the United States Constitution and Nevada law.

2. The ESTATE is entitled to conduct independent DNA/HIV testing in order to adequately challenge the reliability and accuracy of Defendants’ methodology, analysis, reliability of the laboratory and technicians involved in the testing, reports authored, prepared, issued and presented to the Court by Defendants, equipment, and methods selected and controlled by Defendants.

3. The DNA/ HIV testing on TOMMY’s PRESERVED TISSUE. As in a magnitude of other cases, would be a way of finally excluding TOMMY non-stop accrual of continuing wrongful charges. And continuing wrongful convictions through until Defendants’ wrongful allegations of Death-By-AIDS charges against TOMMY on September 01st,2013.

4. A failure to introduce TOMMY’s PRESERVED TISSUE for DNA/ HIV testing could lead to an inference. A spoliation, i.e. the destruction or alteration of evidence. 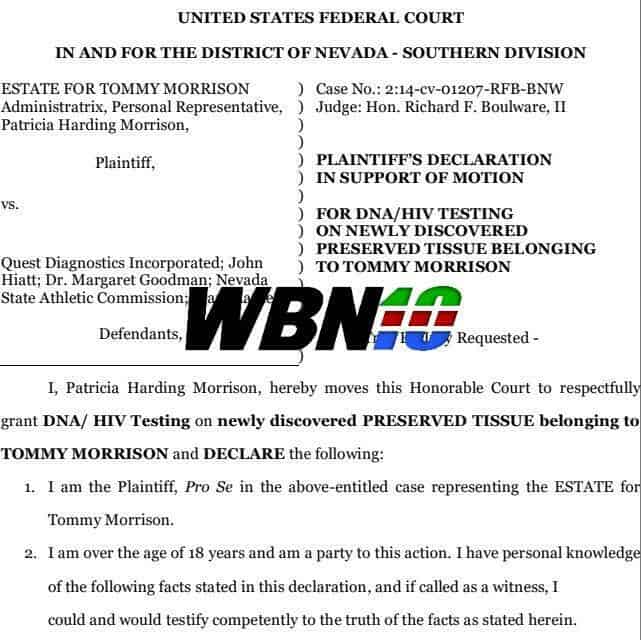 It’s now down to the legal system. The judge did accept the documents and filed them late on Tuesday.

The fight continues for Trish to get justice in Tommy’s name for the way he was treated and discharged from the sport at the height of his powers.

Almost 27 years old at the time of his last event against Lennox Lewis, Morrison was forced to fight in Japan. He then embarked on a limited two-bout career a decade later.

Trish believes Morrison was firmly ostracized from having any high-profile career in the sport after the Lewis fight. Furthermore, she wants any court decision to reflect this fact.

The fight continues. World Boxing News will monitor the outcome.