Anthony Joshua has opened up on a confrontation with Tyson Fury fans just before the heavyweight champion was pictured with his rival.

Captured by mobile phones giving a middle finger gesture to some Fury supporters, Joshua has now revealed what went down.

The pair then had a staredown in the street in what was believed to be a staged event for the media. This has since been denied by Joshua’s promoter.

Both Joshua and Fury were taking a relaxing break in Marbella, Spain, and just happened to be in the same place at the same time.

Joshua picks up the story.

“I bumped into Fury last week,” Joshua told Sky Sports News. “It’s funny because I was at a pool party. I was chilling with a couple of my boys, some of my mates live out there.

“Fury fans were there. There was a healthy, sporting divide – Fury and AJ. They were shouting ‘Tyson Fury’ as I walked off. 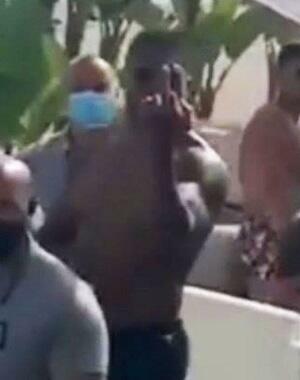 “I gave them a gesture to let them know that I’m still here, I’m one of the lads as well!

“On my way back they tried to do it again so I confronted them.

“I said: ‘I’m here for the banter but let’s not make it a disrespectful thing. We’re all just here for a good time’.

“That calmed that situation down. The next minute, I bumped into Fury!

“It’s only right me and him will bump heads soon. We’ll put on a great show for the British public and the world. It’s going to be a massive fight.”

At present, a date in late 2021 has been penciled in for Fury vs Joshua, giving both sides plenty of time to ramp up the Pay-Per-View sales.

Four bouts, including three mandatories, have got to be followed through on before then. If Fury and AJ are successful, it sets up the biggest British fight in history.

Eddie Hearn has promised to stage at least one of a Fury vs Joshua double-header in the UK, offer dependent, with Wembley Stadium the favorite.

The other is more than likely to happen in Las Vegas. That’s provided the coronavirus is under control by then.

With just under a year and a half to go, fans can expect a lot more shenanigans between the pair before the first bell goes on an undisputed battle.