World Boxing News has been informed of the sad passing of the legendary Bernard Hopkins and Shane Mosely trainer Naazim Richardson.

Richardson, who also coached ex-cruiserweight champion, Steve Cunningham, among others, really was a larger-than-life character in the sport.

The Boxing Writers Association of American confirmed the news on Friday.

They said: “The BWAA and the boxing community mourns the death of the great Nazim Richardson. 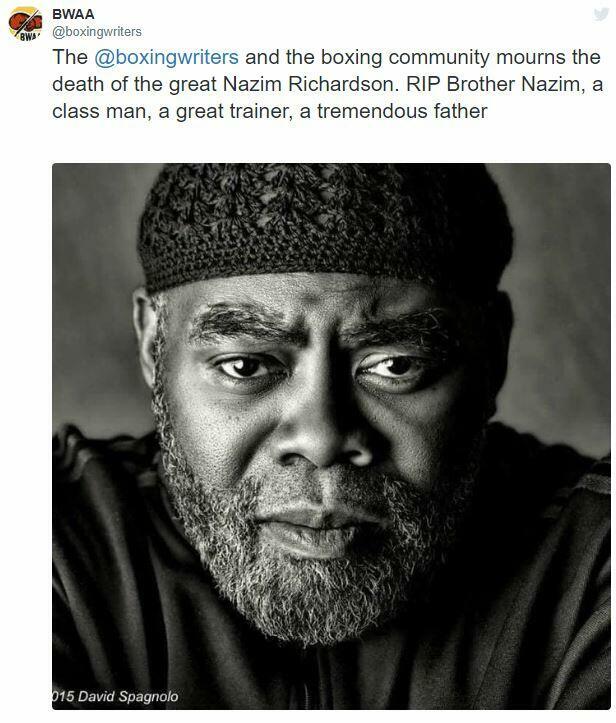 The Philadelphian was much revered in the boxing world and one of the most likable people to be around during fight week.

Richardson is probably most famous for being the man who caught Antonio Margarito with plaster in his gloves. This led to a suspension for the Mexican.

A devout Muslim, Richardson suffered a stroke in 2007, but continued to work as best he could alongside Hopkins as ‘The Alien’ made history as the oldest champion of all time.

Also guiding Mosley to record-breaking efforts against Floyd Mayweather and Manny Pacquiao. Both of which Mosley gave a good account in defeat.

Speaking to The Philadelphia Inquirer back in 2014, Richardson told how boxing had saved him.

“If you had gone back and asked everyone what would happen to me, everyone would pick me to be the one that was dead or in jail,” Richardson said.

Hopkins said of his great friend in the same interview: “We feed off each other’s adversity.

“Everyone has a story that could have ended their lives or stopped their careers. But somehow we found a way to not fall victim to those challenges.

“It’s good to know that he’s a fighter, not a quitter.”

At this time, there are limited details of how Naazim died. Furthermore, WBN will update in due course.

WBN would like to send our condolences to the family of Naazim Richardson at this time.