Boxing great Floyd Mayweather has been accused of cherry-picking an opponent when bringing two sides of combat sport together in 2017.

Dillian Whyte, a British heavyweight Pay-Per-View star aiming to cross over to MMA at some point, called out Mayweather for his multi-million dollar clash with Conor McGregor.

Mayweather targeted McGregor due to his lack of pugilistic skills, according to Whyte. Who himself wants to face UFC brute Francis Ngannou over two bouts.

“I want to fight the best,” said Whyte in a discussion with ‘The AK and Barak Show‘ on Sirius XM in an exclusive interview shared with World Boxing News.

“A lot of guys cherry-pick, Like Floyd Mayweather with Conor McGregor. We all knew Floyd was going to beat McGregor.

“Anyone with any sense knows in a boxing match Floyd’s going to beat him because Connor ain’t got the skill.

“But I am trying to make this thing happen with someone who is competitive and someone who can win in Francis Ngannou.

“He can win a boxing match against me because he carries power and he’s active.

“Also, he’s young and he’s fresh. He has an air of invincibility about him. We said we will do one in the ring and one in the cage.” 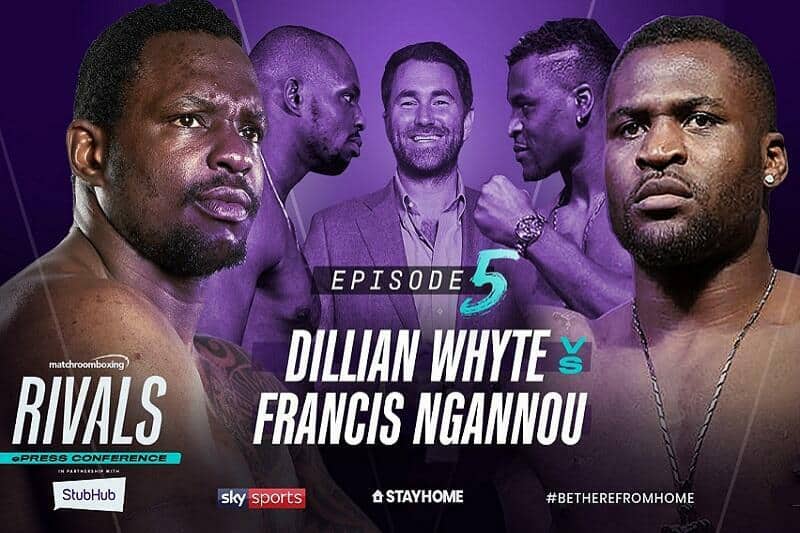 On wanting another challenge despite being on the cusp of a heavyweight title shot against WBC title-holder Tyson Fury, Whyte added: “I am not one of those dudes that says; ‘oh I just wanna do it on my terms’. No, I am out there trying to make history.

“I come from kickboxing. And I have tried MMA fights so I am alright. I can take care of myself.

“Francis is active in a cage. He’s a top heavyweight and he’s been putting people to sleep.

“I ain’t scared and I’m down to do it both ways,” he concluded.

Earning over $300 million for one night’s work against McGregor, it’s hard to criticize Mayweather for taking that kind of money.

The five-weight champion saw an opportunity and took it. Making one of the smartest moves in the history of the sport – cash-wise.

If Whyte could make ten percent of that in two fights with Ngannou, he’d be doing very well indeed. We shall see.