Roberto “Manos de Piedra” Durán managed to knock out the coronavirus, and is at home after a stay at the General Hospital in Panama.

We had just finished celebrating the 40th anniversary of that historic triumph over Sugar Ray Leonard, which happened on June 20, 1980, when the news of Durán’s admission to the hospital was announced.

Roberto always showed positivity and tranquility, and put himself in the hands of doctors, nurses and the entire medical staff that was there to attend to him. The discharge from the hospital was very emotional, and demonstrated the greatness of all those heroes of humanity who are there ready to save the lives of whoever is in a difficult situation.

Durán is a great lover of life, smiling and joking; he is always ready to pass the days with happiness and without worries. Family man, married to “La Fula,” as he calls her, and always taking care of his children. He has a lot of friends, he enjoys music and television.

Manos de Piedra has Mexican blood; The son of a Mexican father and a Panamanian mother, he has a large family on the border of Mexico and the United States, since his father belonged to the Armed Forces, while he was based in Panama he met his mother and married.

For Durán there can be no greater pleasure than being able to sit and watch Mexican movies, or put on tapes with music from Mexico. Jorge Negrete, María Félix, Pedro Infante, Angélica María and César Costa are his favorites; Cantinflas, his favorite comedian.

On June 20, Alberto Guerra, Vice President of the World Boxing Council (WBC), organized a heartfelt tribute to the anniversary of that triumph over Leonard. It was during the First Round Latin America program, during the weekly conversations at the Latin American Business School-Infaresa. 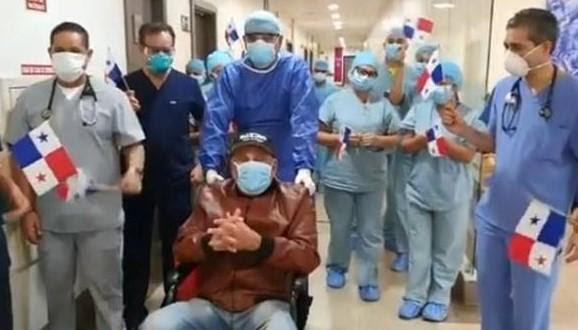 Sergio Fertusio and Leo Ledda led the program, with the formidable participation of Daniel Alonso, who was in charge of giving a masterful introduction to the life of Roberto Durán, which was so impressive and emotional that Manos de Piedra was smoked that he had tears in his eyes and broke down while trying to say a few words.

It was June, 1980. Duran, having vacated the WBC Lightweight World Championship due to weight problems, challenged who was considered the best boxer in the world, the Maryland Wonder, Sugar Ray Leonard.

Roberto arrived in Montreal and earned the affection of local fans; He went on to intimidate Leonard, and by getting into the ring, he accomplished the unthinkable and snatched the WBC welterweight world championship from him. That night the greatest idol in the history of Panama was born.

Durán returned to his country and found hundreds of thousands on the streets to receive him. To this day, he is the person who enjoys the most recognition in that beautiful country.

Manos de Piedra continued his career in the ring and returned to capture two more world championships. He captivated the attention of the world. He is one of the most important boxers in all of world history.

Roberto Durán is simple, adorable and grateful. He took the issue of the pandemic with great responsibility and concern. He stayed at home and followed all the recommendations; He was even a spokesperson for various campaigns in which he participated to try to alert people to the risks of the coronavirus, asking them to stay home observing total hygiene.

On his birthday, and because he was so loved, he was visited at home by various people, who came to give him the congratulatory hug, talked and left; it turned out that one of those visitors was the one who infected him, and that unleashed his problem.

Durán has been thanking the so many who showed their affection and concern; Social networks were flooded with messages of encouragement for the champion. Among the most prominent was from Sugar Ray Leonard, Mike Tyson, and the current boxing idol, Saúl Canelo Álvarez.