World Boxing Council chiefs pieced together an amazing Lightweight Tournament recently that would eventually crown one sole champion in the division.

Firstly, Franchise champion Vasyl Lomachenko was to be joined by WBC champion Devin Haney and a host of other talented 135 pound stars, including Ryan Garcia.

Secondly, as WBN reported last week, Garcia was pitted against Briton Luke Campbell. At the time, WBN had severe skepticism about the contest taking place.

Not only was it doubtful in the coronavirus climate. But the clash just didn’t seem like it would happen at this stage of the game.

Fast forward just a few days. The World Boxing Organization has thrown a spanner in the works.

The WBO has ordered an elimination contest between Garcia and highly-ranked contender Emmanuel Tagoe.

In their clarification, the WBO told representatives at Golden Boy and DiBella Entertainment: “Please be advised the parties have twenty (20) days upon receipt of this letter to negotiate and reach an agreement regarding the WBO Lightweight Elimination Contest between WBO Lightweight Participants Ryan Garcia and Emmanuel Tagoe.

“If an accord is not reached within the time frame set forth herein, a Purse Bid will be ordered pursuant with the WBO Regulations of World Championship Contests. 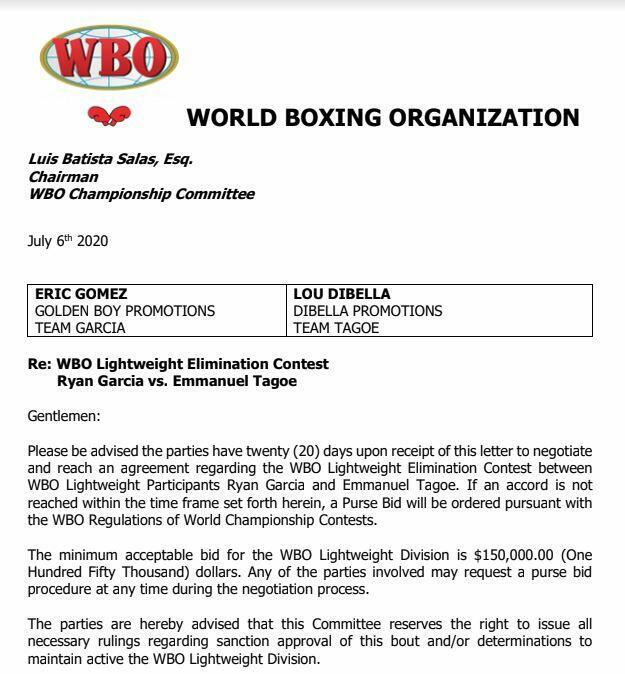 “The minimum acceptable bid for the WBO Lightweight Division is $150,000.00 (One Hundred Fifty Thousand) dollars. Any of the parties involved may request a purse bid procedure at any time during the negotiation process.

“The parties are hereby advised that this Committee reserves the right to issue all necessary rulings regarding sanction approval of this bout. And/or determinations to maintain active the WBO Lightweight Division.”

Despite the order, WBC President Mauricio Sulaiman was adamant that Garcia had the blessing of promoter Oscar De La Hoya to participate in the competition.

There are still significant question marks over Garcia vs Campbell getting over the line At least in the second half of 2020 anyway.

It could be more likely to take place in 2021 due to the virus crisis. Both fighters should be able to get an interim fight under their belts beforehand.

Jorge Linares vs Javier Fortuna has already been confirmed for the World Boxing Council ‘Diamond’ Lightweight belt. Furthermore, an opponent for Haney is yet to be confirmed.

The event will culminate in the last man standing battling the winner of Lomchenko vs Teofimo Lopez for all the marbles at 135.

Loma vs Lopez needs a final date and venue.