Advertisements
Home » Yes, Eddie Hearn really is hosting a PPV boxing event in his back garden

Yes, Eddie Hearn really is hosting a PPV boxing event in his back garden

Much has been said about Eddie Hearn’s plans to stage boxing in his garden but nobody really expected the promoter to charge people for the privilege.

Upon the first wind of Matchroom’s ‘Fight Camp’ setting, it was thought a series of bouts would be put on with the fans in mind.

As with most returning sports, like the Premier League and others, free-to-air events were confirmed in order to give those watching at home and on lockdown the opportunity to watch top-class sport.

Eddie Hearn, as we know, is a staunch supporter of the Pay-Per-View event but it was still hoped that any bouts during the worst of the pandemic would be available off the paid platform.

Not so, and punters are waiting with bated breath to hear the price. As WBN previously reported, some are calling for around a five-pound charge. Down from the usual £19.95.

But surely most purchasers would be quite happy to pay half that, given the current unemployment plight of lots in the country.

If the Essex man is going to charge for the final of four backyard BBQ shows, then something around a tenner would certainly be the most anyone should expect.

Top of the bill on the night is Dillian Whyte, a fighter Hearn seems unable to allow to fight off PPV. It’s like the Kell Brook situation, once you go back from charging PPV for a fighter, it’s hard to return.

Whyte takes on the veteran and past-his-best Alexander Povetkin on the night, putting the WBC interim title on the line.

‘The Body Snatcher’ has no qualms about fighting in on the Hearn Estate as he told Sirius XM’s ‘The AK and Barak Show’ in a recent interview. 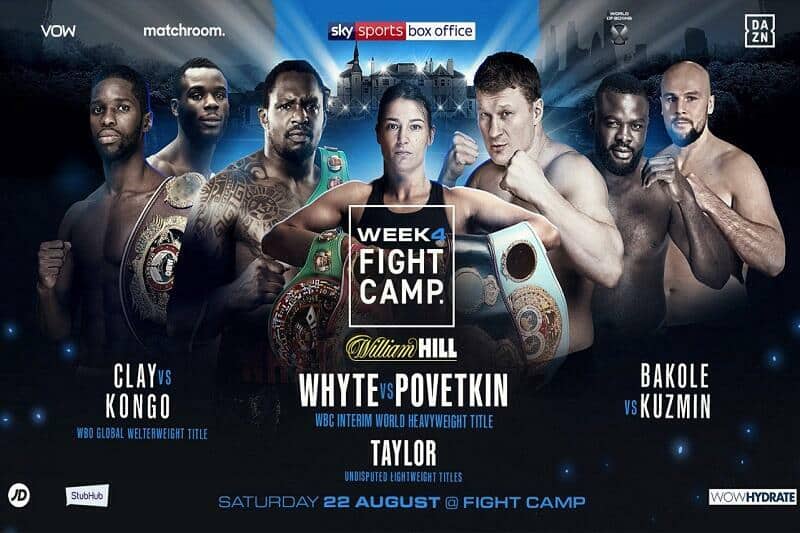 “Firstly, I think its a great idea because we are in new times,” pointed out Whyte. “The world has never seen anything like this magnitude.

“In times like this, people need things to look forward to. Whether it’s a date or an event, we are sports fans. We are involved in sports but we are still big sports fans. So we like fights, we like baseball games and we like football.

“When there is a big fight or a big game you think, ‘oh man in two weeks this is going down. I cant wait to see this’.

“So in times like this people need things to draw energy from to motivate themselves. People need it to be on so people can get together an be like oh there is boxing on.

“So I think it’s a great idea what there doing.

He concluded: “Firstly, people draw hope from all different things from life. In times like this its something positive.

“Secondly, I am a fighter and I’m an old school junkyard dog. A fights a fight.

“I don’t pretend to be some hard guy or some beast or anything. I’m just a normal dude, but I look for fights. I grew up fighting and I know how to fight.”