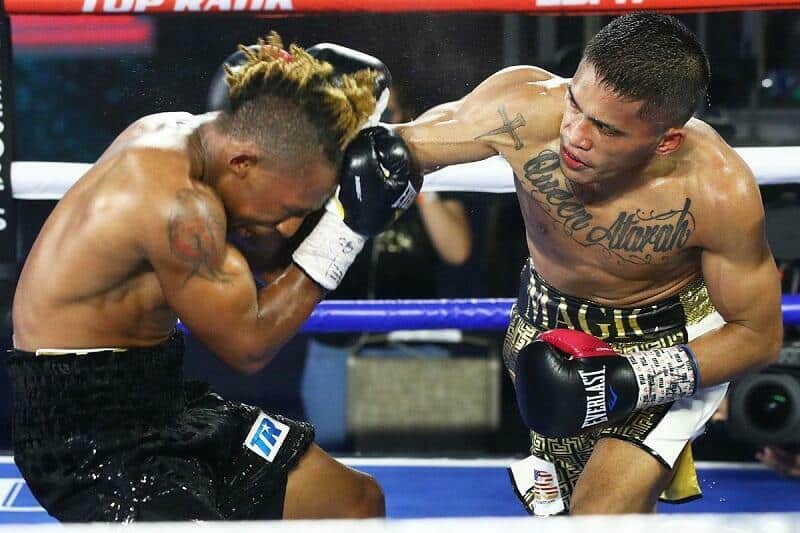 “Magic” Mike Plania had an evening that was nothing short of magical. The Filipino upstart stunned WBO No. 1 bantamweight contender Joshua Greer Jr. via majority decision Tuesday evening from the MGM Grand Conference Center—Grand Ballroom.

“This win is going to change my life,” Plania said. “I thought I could knock him out after the knockdown in the first round, but he was tough and adjusted his strategy.

“I took this fight on only three weeks’ notice, but I had faith in God that I could win.”

Giovani Santillan (26-0, 15 KOs) extended his unbeaten record, but former world champion Antonio DeMarco (33-9-1, 24 KOs) sure didn’t make it easy. Santillan, from San Diego, edged DeMarco via 10-round majority decision in the welterweight co-feature (95-95, 96-94 2x). The three judges agreed on only three of the rounds in a fight that some experts had DeMarco pulling out.

“I knew it was a close fight, but I felt like I did enough solid work in there to pull out the win,” Santillan said. “He never hurt me at any point in the fight, but he used his experience in there. He’s a former world champion who has been in there with the best of the best. I want to get back in the ring as soon as possible and use this experience to my advantage.”

Bobirzhan Mominov (11-0, 8 KOs) outworked noted spoiler Cameron Krael (17-16-3, 4 KOs) to earn a unanimous decision in a six-round junior middleweight bout. Mominov was deducted a point for hitting behind the head in the sixth round. The scores were 57-56 and 58-55 2x.