Rumors had been circulating around social media that Tyson put out a tweet and then deleted it soon after. WBN understands this is not true.

The words did not come from Mike Tyson and were simply doctored to look as though they came from his account.

Quite inciteful in their content, the words read: “If white people rioted every time a black man killed them, we’d never have any peace.” 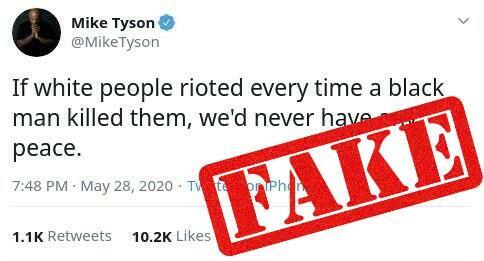 This is not something that would ever come from Mike Tyson. It is simply an attempt to polarize the ongoing situation.

Tyson is hard in training for a comeback to boxing in the coming months after announcing his decision to return after a fifteen-year absence.

‘The Baddest Man on the Planet’ had not posted anything on his Twitter account from May 24 through to June 1st due to his concentration being on training camp.

Unrest has been rife in America as Tyson and his former opponent Evander Holyfield prepare for a potential trilogy fight by the end of the year.

Reports have surfaced that the pair may be willing to accept an offer from the Middle East to trade blows again under monitored conditions.

At present, boxing is not only on hold due to the coronavirus pandemic. The whole of the world is focused on what’s happening in the United States.

Civilians are protesting the murder of George Floyd as a small minority take the opportunity to loot and send out the wrong message.

President Trump stands accused of breaking up a peaceful rally in order to participate in a photo opportunity on Monday. It’s yet another example of what is wrong with America at this time.

More needs to be done to combat the treatment of those who struggle daily with police brutality.

Trump is yet to fully address the situation. This is despite high-profile celebrities and media calling for someone to lead the country.

To offer some sort of calming tone. They need it right now.