People all across the United States will rightfully pay respect to fallen military men and women during this Memorial Day weekend. One true American Patriot that USA Boxing will remember forever is 1964 Olympic bronze medalist Robert “Butterball” Carmody, who was killed in action three years later at the height of the Vietnam War.

Born in 1938, Carmody learned to fight on the streets of Brooklyn, where he lived before joining the U.S. Army in 1957, and where he took his first boxing lesson. A natural-born fighter, he was selected to represent the 11th Airborne Division, even after it was deployed to Germany, after he had earned his airborne wings, and Robert developed into a record 4-time All-Army flyweight champion.

Carmody also captured top honors at the 1962 International Military Sports Council and earned a bronze medal in 1963 at the prestigious Pan American Games. At the 1964 Olympic Boxing Trials, held at the famous New York’s World’s Fair, he upset flyweight favorite Melvin Miller to earn a spot on the 1964 USA Olympic Boxing Team.

At the Olympics, Carmody became a close friend of heavyweight Joe Frazier, the lone American to win an Olympic gold medal at the 1964 Olympics in Tokyo, Japan. The smallest and biggest men on the Olympic Team were buddies. Frazier, of course, went on to become a Hall of Fame heavyweight champion, who was inducted into the USA Boxing Alumni Association Hall of Fame this past December.

“He’s the type of guy you really need,” Frazier said in a 2006 ESPN.com interview. “I had some hard times, things was rough, but he was a guy that helped you out a lot. I loved him like a brother.”

Hampered by a bruised hand, the 5′ 2″, 112-pound Carmody had a bye in the opening round, knocked out Nam Singh Thapa (Nepal) in his first fight, took a decision (4-1) versus Otto Babiasch (Germany), and lost in the semifinals by way of a questionable decision (1-4) to the eventual Olympic champion, Fernando Atzon (Italy). 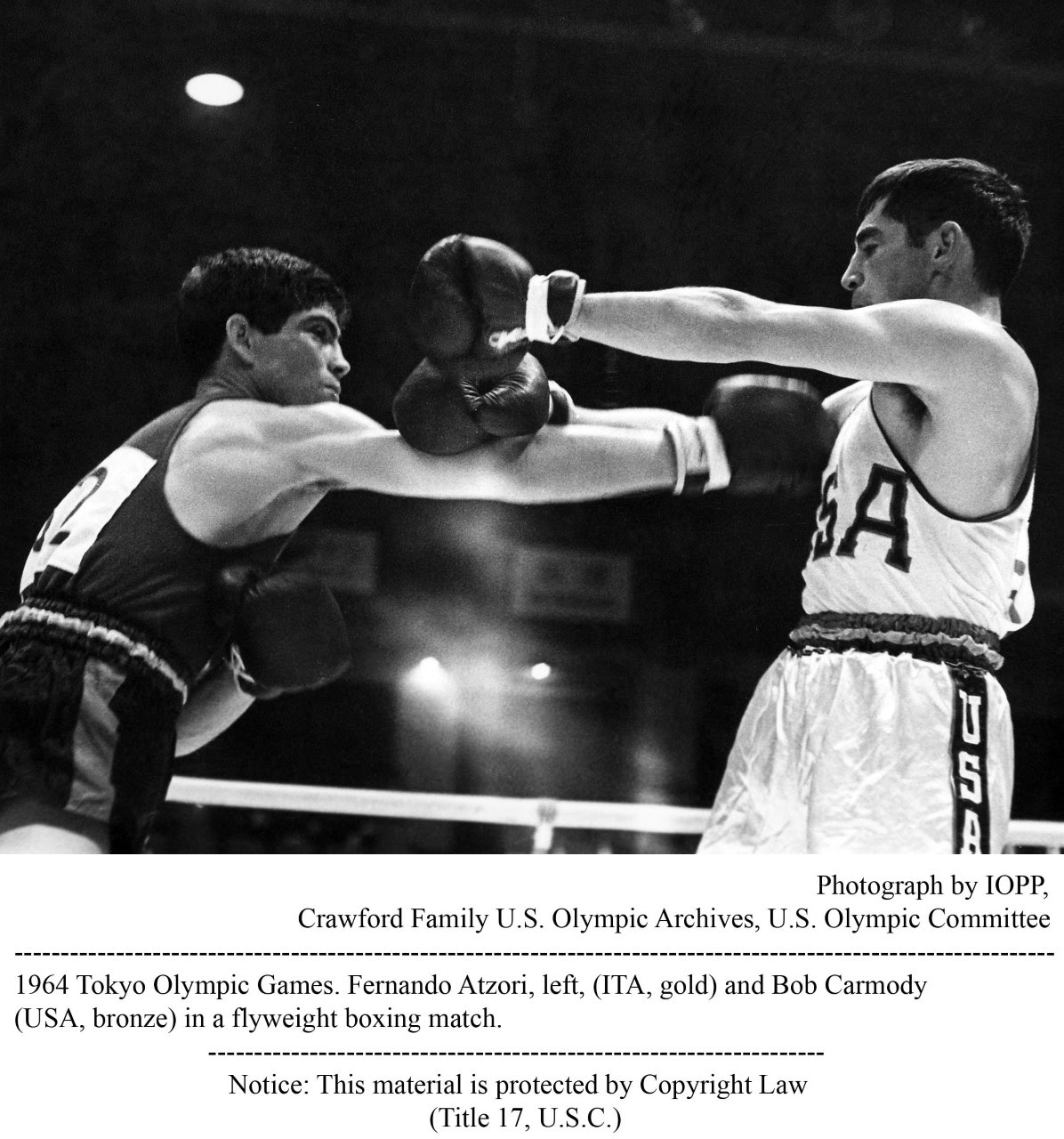 Although he never publicly complained about the decision that may have cost him an Olympic gold medal, Carmody was visibly upset as he headed to the locker room, when General William Westmoreland hollered to him, “Good job, soldier!” Carmody, though, turned and reportedly yelled back, “You dumb son of a bitch!”

After the Olympics, Carmody retired from amateur boxing with a 128-12 record, returned home and rather than turn pro, he decided to stay in the U.S. Army, training a few teams at the International Military Sports Council, including the U.S. Army squad.

Strings were pulled for the 10-year military veteran, because of his imposing status as an Olympic bronze medalist, he didn’t have to go with his 199th Light Infantry Brigade when it was deployed to Vietnam. But even though he wasn’t combat trained, due to his training as a boxer, Carmody insisted on deploying with his unit on June of 1967, the day his son, Robert Carmody, Jr. was born.

A few weeks later, Staff Sergeant Carmody’s unit. D Troop of the U.S. 17th Calvary Regiment was on a routine six-man foot patrol north of Saigon. They were ambushed by Viet Cong guerillas and five of the six U.S. soldiers were killed, including Carmody, who was posthumously awarded a Bronze Star for valor. He became the first Olympic boxing medalist to die in combat.

“Robert Carmody’s selflessness and character extends far beyond our sport of Olympic-style amateur boxing,” said Chris Cugliari, USA Boxing Alumni Director. “A warrior in the ring, a hero outside of the ring – he showed the world the very best of what USA Boxing has to offer, and the USA Boxing Alumni Association looks forward to keeping his legacy alive.”

“On this Memorial Day, USA Boxing wants to recognize and honor our fallen heroes who have gave their lives in defense of our country, like Robert Carmody,” stated USA Boxing Executive Director Mike McAtee. “On this Memorial Day, I think it is important to also recognize all who have served in our military, which Billy Ray Cyrus stated, ‘All gave some and some gave all.’ Thank you for your service, we will never forget.”

Olympic Bronze Medal winner to Bronze Star recipient, Robert Carmody was a fighter true and true, as well as a man of tremendous honor, and a legitimate hero.