Tributes have been paid following the passing of Jimmy’s Corner legend Jimmy Glenn. He died of coronavirus at the age of 89 this week.

James Lee Glenn was born on August 18, 1930; an only child for a loving mother, by the name of Susie Glenn.

She moved he son upward from South Carolina, to Baltimore, and then Washington DC before making a home in New York City. As she was attempting to create a new and better life for herself and her son the events of the outside world called her child back to his South Carolina roots.

When World War II broke out James Lee Glenn was summoned back to help his grandfather on the farm, while his uncle was drafted and sent overseas. James returned to New York City in the 1944, a place he has called home ever since.

Even at a young age James believed in hard work, loyalty and respect, the principles that became the cornerstones not only of his career but his life. These principles are echoed in his choice to drop out of Cooper Junior High School after two years in order to help support his mother. From his first job as a mechanic in a laundry mat, through jobs as a delivery boy with the Dan Feldman hat trimming business, a truck driver for Len-Wolf Textiles, and a salesman for House of Wagner, a wig company; James always lived by his principles in order to earn an honest wage.

While working and doing what he needed to do for his family, James started to make a niche for himself in the boxing world. At a young age James Lee Glenn developed a passion for boxing that would last him the rest of his life. He began his boxing career by joining the Police Athletic League, where he won a championship. It was after this victory that James felt he was ready to begin a real boxing career.

In I 949,he began his short career as an amateur boxer. He spent the next two years fighting in The Golden Gloves as a welterweight and middleweight. In his short career James managed to amass a record of 14 wins and 3 losses, with one of those losses coming at the hands of legendary heavyweight champion Floyd Patterson. At this point James hung up his gloves in order to start, not only a family, but also his true boxing career. Here is where he made the transition from an amateur fighter to a trainer, manager, cut man, promoter, friend, mentor, historian and a true gentleman of boxing.

From the moment that the sport of boxing entered his life James Lee Glenn’s passion for it has grown and he has pursued it as he has pursued all the truly important things in his life with passion tempered by patience.

He started his true boxing career at the Third Moravian Church on East 1271h Street where he taught boys and young men, many not much younger than himself, how to box. He saw it as a way to give back to the community, by keeping youth off of the troubled streets of East Harlem.

The church which was struggling financially found James’ volunteer services to be an immeasurable help. After several years running the boxing program, often out of his own pocket, The Protestant Council of the City Of New York stepped in and co-sponsored a boxing program with the church.

They hired Mr. Glenn as the director. He did this all in addition to working full-time to support his family. However, his passion carried him through and he organized a team of boys and men that amassed many victories at various tournaments. Unfortunately his boxing program came to an end when the church was torn down in order to build projects.

Never one to allow himself to be stopped by adversity, James Glenn just moved his game downtown. He left his day job to open a bar, in the heart of Times Square. His bar, like the man who owns it, has become a New York City landmark standing in the same location for over 30 years. His bar is fittingly named, what else but, Jimmy’s Corner.

At the same time he remained active in boxing working as a trainer and cut man. Among those he worked with were Floyd Patterson, Bobby Cassidy, Ralph Correa, Howard Davis Jr., Terrance AlIi, and Mark McPherson. Soon after settling into his job as a bar owner James began his search for a new gym.

He opened The Times Square Boxing Club in the late 1970’s. From this new venue James welcomed everyone with an interest in boxing and a willingness to follow his simple rules; honestly and respect. Young fighters fought their way through the seedy streets of Times Square, where greed and crime ruled, up to the second floor gym, where respect, perseverance and hard work were the order of the day. 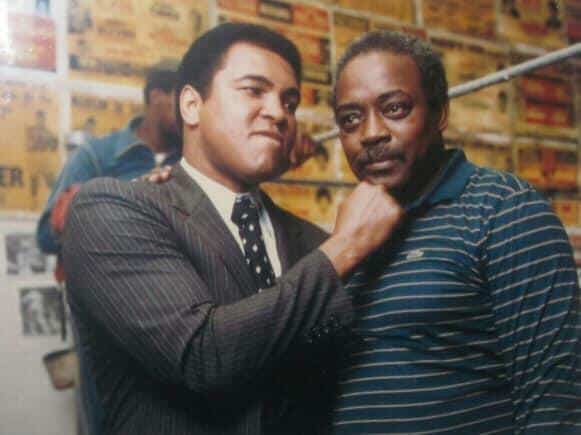 Though many of them lacked the skills or the talent to be the next Hagler, Leonard, or Spinks they kept coming back to learn the sport of boxing. They learned from the big man, with the soft voice, who they all called Mr. Glenn and though few of them became champions he helped them all become men.

The Times Square Boxing Club was a boxer’s gym decorated with old fight posters and carrying the faint smell of sweat and wet leather, a smell almost synonymous with hard work. It had heavy bags sagging from their temporary fittings in the ceilings, speed bags held together with mounds of adhesive tape, a cracked mirror and leaky showers, but no one ever complained. It became a haven for true boxers from all over the city and attracted many champions on their way to fights in Atlantic City and Madison Square Garden. At one point or another most boxing’ big names, at the time, came through Times Square Boxing Club to train and soak up the atmosphere.

In the early 1990’s The Times Square Boxing Club was closed down due to the renovation of the Times Square area. However, James Lee Glenn has not allowed that to slow him down. Though he must work out of a gym that is not his own James has not allowed himself to be deterred and continues working as a trainer, manager, and cut man.

James Glenn has been in the sport of boxing for over 50 years. Though his accomplishments within the boxing world are numerous and his knowledge of the sweet science is vast he is a man whose true value goes beyond his trophies and champions. James Glenn has touched the boxing world so profoundly not because he teaches men to be fighters but because he teaches fighters to be men.

The World Boxing Association sends its condolences to all the family and friends of the famous Jimmy Glenn, who died on Thursday because of Covid-19.

Glenn had been in the hospital for days with a delicate condition, but he couldn’t fight it. He was 89 years old. Jimmy was a boxer in the 1940s, but he also worked as a trainer, cutman, promoter, among other roles. His work as a cutman for Floyd Patterson is widely remembered.

He was also known as the owner of the bar “Jimmy’s Corner”, very famous in New York for having a boxing memorabilia and hundreds of photos related to the sport of flat noses hanging on the walls.

A great storyteller, Jimmy had lived through some great boxing moments and was loved by the entire New York boxing community. The WBA regrets his departure and sends words of encouragement to all those close to him. May he rest in peace.