The new relationship sees the charity included in a nationwide outdoor campaign, thanks to Ocean Outdoor’s £10m SME Support Scheme.

AMG’s ‘Champions of Purpose’ campaign, will help celebrate a range of elite UK athletes and the charitable causes they support. Gloves Up Knives Down is one of the charities selected, and will feature with ambassador Chamberlain, across multiple UK sites including London, Birmingham, Manchester, Liverpool, Glasgow, Edinburgh, and Bristol, for two weeks, from today.

David Edgell, one of the co-founders of GUKD said: “This exposure for a charity like ours is phenomenal. It puts Gloves Up Knives Down on the radar to the public throughout the country and is a great way of announcing our new ambassador Isaac Chamberlain!

“In February we launched our ‘Preventive Intervention’ scheme that aims to reduce knife crime on the streets by giving kids a free-starter boxing kit and lessons – effectively providing a positive path in life than that of a life on the street. We hope this new two weeklong outdoor campaign will garner even greater exposure for the charity and enable us to provide even more boxing kits to children around the UK. 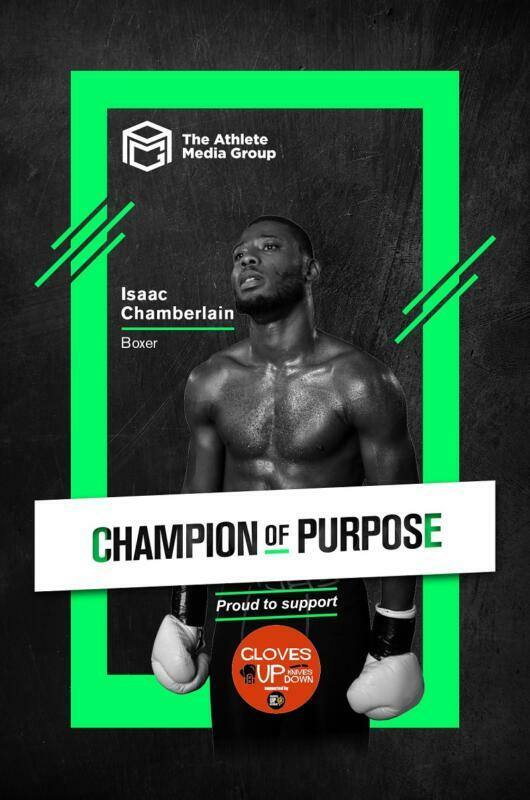 “We are also running a competition on our social media alongside the campaign to enable 132 youngsters between the ages of 7-13 to acquire an iconic Gloves Up Knives Down Starter Boxing Kit. Simply take a selfie in front of one of the Isaac Chamberlain sites, post on Instagram or Twitter and tag us! Keep an eye on our Instagram for all of the details.”

The charity works closely with communities across London to provide increased access to boxing facilities and lessons for young people from troubled communities. Today’s launch saw boxers past and present support the new campaign targeting seven to 13-year-olds, discussing the benefits of getting children into sport and how boxing can boost mental well-being while keeping young people out of dangerous trouble.

Isaac Chamberlain adds: “I’m really excited to not only be an ambassador for a charity as important as Gloves Up Knives Down, but also part of a nationwide outdoor campaign.

“The charity deserves to be recognised and I’m looking forward to helping create wider awareness and support their fundraising in the coming months.”