‘The Dream’ caused a media storm when stating he’d, ‘never lose to a white boy’ and has chosen to explain his comments to Mauricio Sulaiman.

Haney is still hoping to be reinstated as WBC title-holder after becoming ‘champion in recess’ when suffering an injury, just before the coronavirus crisis hit.

The WBC had ordered Luke Campbell to face mandatory Javier Fortuna for the vacant strap, although Haney wants his belt back after a long delay stalled the sport.

Outlining his intentions to be a fighter for the younger generation to look up to, Haney rejected flat out any suggestion of a racist tone.

The American then cited Floyd Mayweather as his inspiration for becoming one of the best fighters of his generation.

“I just had a very positive conversation with Mauricio Sulaiman, President of the WBC,” said Haney. “I confirmed to him directly my commitment to be a role model and my absolute rejection of discrimination of any kind! 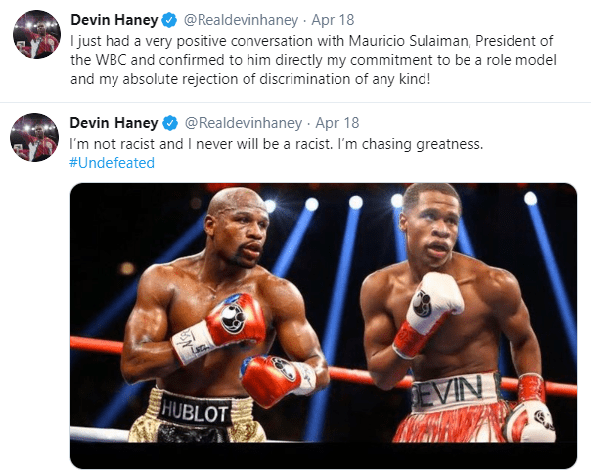 “I’m not racist and I never will be a racist. I’m chasing greatness,” he added when posting a picture of himself posing alongside a picture of Mayweather.

At just 21 years old, Haney is still learning and finding his place in the world, let alone the boxing world. So being too harsh of him at this point would do nobody any favors.

Vasyl Lomachenko, who many think was the target of the comment, doesn’t seem to be on Haney’s radar right now.

Instead, a featherweight in Gary Russell Jr. has been the focus of Haney’s recent call-outs.

“I will punish Gary Russell Jr. when the lights come back on! I think he’s capping! You can’t hunt a hunter!

“The only plan I have is to fight whoever is the best available, whenever or wherever!

“When you “so-called” don’t fight nobody it’s one thing if nobody wants to fight you its another thing. I will bet seven figures on myself against anybody in my division!”