World Boxing News has followed the situation regarding the World Boxing Association’s heavyweight division closely over the years as confusion reigned for the most part.

Back in 2011, when WBN was barely a year old, David Haye fought Wladimir Klitschko amidst a frenzy from excited European boxing fans.

They were finally getting the fight they wanted and four versions of the top division crown unified at the same time.

If Haye won, as the WBA belt holder, the possibility fans could see the first undisputed champion in ten years was real.

Wladimir’s brother Vitali held the WBC strap, the only other not on the line and in his younger sibling’s possession.

Haye knew the stakes were very high. Victory over Wladimir would lead to an immediate clash with his Vitali and the chance to go for all the marbles.

Sadly, a busted toe and a misfiring performance later, Klitschko added the WBA title to his IBO, IBF, and WBO.

But it was the WBA who had a surprise for everyone. Declaring Klitschko as their new ‘super’ champion, the most controversial move in the history of championships in the heavyweight ranks was finalized.

The WBA would now give boxing fans yet another belt to muddy the waters further.

Sanctioning Alexander Povetkin vs Ruslan Chagaev in late 2011 for what was eventually named the ‘WBA Regular’ title, the WBA had brought about a situation that polarized fans completely.

Those who wanted to see Olympic star Povetkin get his shot were all for it, but the rest of the boxing community was wondering why we needed another belt at 200 pounds plus.

It was seen simply as a move to garner more sanctioning fees.

Povetkin held the ‘Regular’ until 2013 when the WBA ordered a fight with Klitschko. It was immediately thought that Klitschko vs Povetkin would mean the end of the short-term title. That was certainly the wrong assumption.

Klitschko vs Povetkin, which just so happened to be the most lucrative heavyweight title bout since Lennox Lewis vs Mike Tyson, and was sanctioned by the WBA under an unbelievable purse bid of $17 million, would be the only time WBA sanctioning chiefs would insist the ‘Regular’ holder gets a full shot. It’s not hard to see why.

At this time, WBN was in constant contact with Gilberto J. Mendoza, the VP but acting President of the WBA.

He told WBN once Povetkin dropped the title that it’s unlikely they would bring back the ‘Regular’ championship. A promise not since kept.

“We have not been contacted by any representative or promoter over the WBA heavyweight title,” Mendoza told World Boxing News in January 2014.

“But also, the WBA super and interim titles might change. We are not sure the regular title will be approved.”

Within two months, WBA controversially called for Fres Oquendo and Ruslan Chagaev to battle it out for the vacant title.

Looking back, I bet they wish they hadn’t bothered as the belt has seemingly been cursed ever since. It’s only been contested four times in six years.

Firstly, Oquendo almost didn’t make it to the Chagaev fight after missing his flight. They then fought out a highly controversial majority decision.

Chagaev had taken the title, but after an appeal, the WBA granted Oquendo’s request for a rematch. It never happened.

Browne won the title in a shock Grozny beatdown, ending Chagaev’s career in the process. Amazingly, Browne was then flagged for a banned substance.

Claims of Russian food tampering and a set-up followed before the Australian eventually cleared his name. But by this time, the title was vacant.

Vice President Mendoza had outlined a tournament would be held, including the WBA ‘Regular’ and WBA ‘Super’ to eventually crown one sole champion.

Mendoza had again gone so far as to inform WBN he would phase out the ‘Regular’ belt after the completion of the competition.

Eight fighters were called up and the round-robin looked like this: 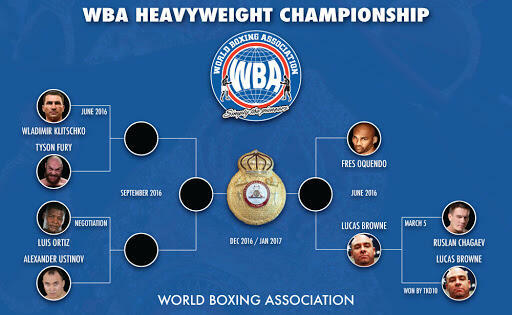 Included was Browne after lobbying to overturn his WBA ban, and due to ‘The Big O’ Oquendo having still not been given his shot from the Chagaev mess – and continually winning rounds of legal battles to do so – they were pitted together in the semi-finals. A sort of bye through the first round.

Klitschko was already facing Tyson Fury in November 2015, and Luis Ortiz would then take on Alexander Ustinov for the interim title.

Whoever eventually came out on top would be the sole ruler. But only one of those bouts ever took place – Klitschko vs Fury.

As we all know, Fury spiraled out of control and eventually gave up all the belts won when upsetting Klitschko in Dusseldorf. But this situation basically killed the tournament plans stone dead.

Browne missed out, Oquendo did yet again and the ‘Regular’ strap somehow ended up in the hands of Mahmoud ‘Manuel’ Charr.

Charr defeated Alexander Ustinov in November 2017 when the WBA sanctioned the fight out of the blue. Under the terms of Browne having his name cleared, it seems Charr was never ordered to face Browne. This was due maybe in part to ongoing litigation by Oquendo.

How Ustinov was approved is anyone’s guess.

Eventually, a fight with Charr was stipulated with Oquendo in 2018 before Trevor Bryan then claimed the interim version. But by this time, the WBA basically three boxers holding titles.

Not to stop there, the WBA then invented the WBA Gold Championship, which was won by Joe Joyce. Now they had four and Oquendo still awaiting his chance.

That’s where we land right now. A year on from WBN dropping WBA ‘Regular’ recognition of the strap as a bonafide world title.

Charr and Bryan held a purse bid won by Don King for $2 million before Oquendo said, ‘hold on, I won a legal challenge to that’.

If Charr vs Bryan does happen still remains under a cloud. But at 47, is Oquendo going to feel he can be competitive or would he rather take a monetary settlement?

Whatever happens next, it surely won’t go smoothly knowing the WBA ‘Regular’ title.