The third man in the ring for one of the biggest heavyweight bouts of all time, Lennox Lewis vs Mike Tyson, has died. Eddie Cotton was 72 years old.

Retiring from ring action in 2014 after 22 years as a referee, Cotton was in charge of almost 300 bouts during his career.

The most notable being Lewis vs Tyson back in 2002. Other bouts included Tyson Fury vs Steve Cunningham and Riddick Bowe vs Andrew Golota II.

WBN wrote about Cotton just last month after he labeled Fury, ‘one of the dirtiest fighters I ever had’ in the aftermath of the 2013 clash.

Promoter Lou DiBella led the tributes to Cotton, who died after contracting coronavirus.

“One of the most well known and respected referees in the world, Eddie Cotton was also one of the nicest people in our sport. Gutted for his wife and family. Prayers up.”

Sad news. #Boxing has lost another good man to #Covid_19. One of the most well known and respected referees in the world, Eddie Cotton was also one of the nicest people in our sport. Gutted for his wife and family. Prayers up. #RIPEddieCotton. pic.twitter.com/fMTNlc91dd

The IBF, where Cotton was a board member after hanging up his dickie bow, outlined more about his death.

“According to his wife Ruby, Eddie was hospitalized 2 weeks ago with pneumonia. He was diagnosed with COVID-19 at the hospital.

“Eddie’s career as a professional boxing referee started in Atlantic City, NJ in 1992 and it was quite a remarkable one.

“He refereed over 50 world title fights, some of the most notable bouts being Riddick Bowe vs. Andrew Golota (2), Lennox Lewis vs. Mike Tyson and George Foreman vs. Shannon Briggs.

“His last professional boxing match as a referee, Felix Sturm vs. Sam Soliman, was on May 31, 2014 in Germany. At that time, Eddie had just been elected as a new member of the IBF Board of Directors.

“Eddie was also involved with several organizations dedicated to youth boxing such as the American Association for the Improvement of Boxing, YCS Foundation and the Lou Costello Sportsmen Club located in his hometown of Paterson, New Jersey.

“Not only was he active in the boxing community, but along with his wife Ruby, both were very involved in their local community and their local government.

“Eddie Cotton was an asset on the IBF Board of Directors, and to the organization as a whole. He had a lot to offer. We are heartbroken and deeply saddened by his passing.

“He was a big guy with a big personality, and always positive. He gave back to his community and was appreciative of his peers in boxing.

“He’ll be missed. Eddie is survived by his wife Ruby and his two children, Candace and Edward III.” 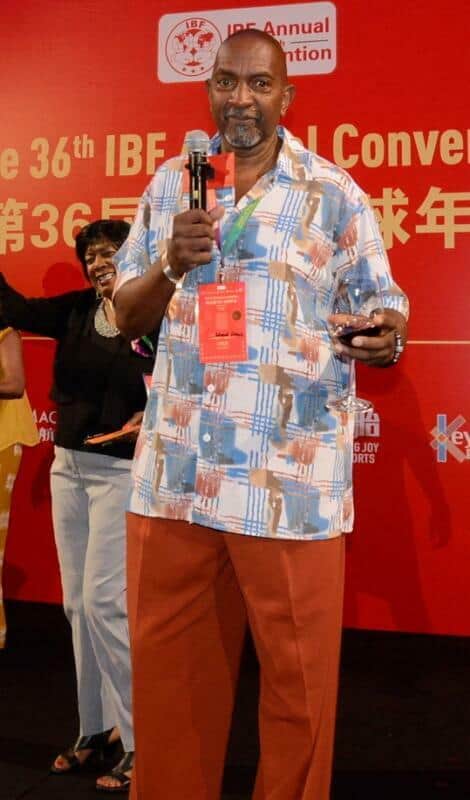 In a statement released on Friday, the World Boxing Association revealed their thoughts on the sad passing of the New Jersey man.

“The World Boxing Association (WBA) regrets the passing of former referee and International Boxing Federation (IBF) board member Eddie Cotton as a result of COVID-19.

“Several media reported Cotton’s departure, as well as sports personalities, sent condolence messages to his family and friends for this unfortunate situation.

“Cotton was a man who gave his life to boxing. He began in the amateur field in 1980, while his first professional fight was in 1992. His last fight as the third man in the ring was for the Felix Sturm vs. Sam Soliman fight in Germany in 2014.

“The New Jersey native was also present in great fights such as Lennox Lewis and Mike Tyson. Others with stars like Wladimir Klitschko, Sergio Martinez, Tyson Fury, among others.

“The WBA sends its condolences to Cotton’s family at this difficult time and fondly remembers a great man who did a lot for the sport.”

Cotton’s home is one of the worst affected regions in the United States alongside New York.