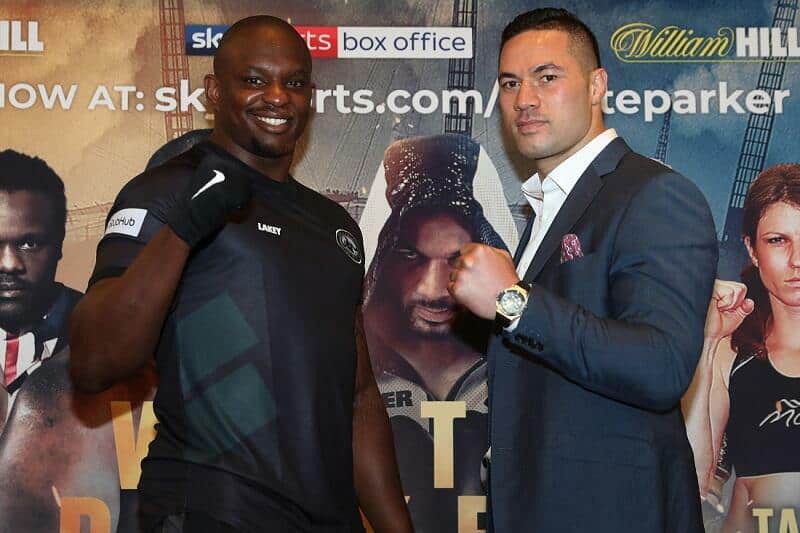 The potential challengers to the Commonwealth heavyweight title have been named with former rivals Dillian Whyte and Joseph Parker on an eleven-strong list.

Whyte and Parker, who met in 2018 as a controversial decision when in favor of the Briton, feature alongside Derek Chisora, Hughie Fury, and Junior Fa.

Nigerian contender Efe Ajagba, who fights out of the United States, is also present.

All those confirmed by the CBC are eligible to face the winner of Daniel Dubois vs Joe Joyce after it takes place for the crown later this year.

Due to the coronavirus outbreak, Dubois vs Joyce could be off the menu until the late summer.

DANIEL DUBOIS V JOE JOYCE was scheduled and approved for 11th APRIL 2020 in London, awaiting a new date for when possible.

Firstly, contenders are listed in alphabetical order. Certainly not in any order of preference.

A Champion is required to defend within the time period set against any of the listed contenders in his weight division. Except in the case where a particular mandatory challenger has been specified, either of such defenses to be considered a mandatory defense.

Should a Champion wish to defend against a challenger not listed then the application must be made to the Hon Secretary of the CBC by him, his manager or a promoter on their behalves.

Permission will be granted subject to approval by the CBC of the challenger. Such a defense will be considered a voluntary defense. The winner will be obliged to make a mandatory defense within the time period specified if this has not already taken place.

Promoters must send copies of contracts to the Hon Secretary together with the appropriate Sanction Fee. Otherwise, the contest may not receive a formal sanction.

Commissions, federations and other boxing regulatory/sanctioning authorities receiving this notice are requested to advise all interested parties within their jurisdictions. Furthermore, also the local press Simon Block Hon Secretary

NB: DUE TO THE UNCERTAINTY AS TO THE COMMENCEMENT OF BOXING AGAIN THE CBC IS MAKING NO ORDER AT THIS TIME IN RESPECT OF DEFENCE DEADLINES.