Capturing an Olympic gold medal is special but overcoming tremendous odds and winning it at home, never mind meeting your future wife, made it extraordinarily special for 1984 Olympic heavyweight champion Henry Tillman.

Tillman was born and raised in the infamous South Central section of Los Angeles. The 1984 Olympic Summer Games were held in LA and Tillman could ride his bike from his home to where he later captured his gold medal at a University of Southern California arena.

“USA Boxing helped me grow up,” Tillman explained. “I learned that no matter what you still have to practice. I think amateur boxing is harder than in the pros. Where you fight every two or three months as a pro, amateur boxers fight as much as five times in tournaments. I was also able to travel the world as an amateur boxer and see the world differently than the general public. I found that the world is different than LA; it’s a big old world out there.

“Amateur boxing also made me a more open person. It opened my world educationally, geographically, and generally interacting with people. I had to communicate with people who didn’t speak the same language. We didn’t have translator Apps like they do today.”

“Records speak for itself, as amateurs and pros” Tillman agreed that the ’84 team is the best of all-time. “People say the Cubans had the best, but they were getting paid, and a lot older than our Olympic boxers. It’s one thing to get hit with a left hook for a trophy, another to help pay the mortgage.” 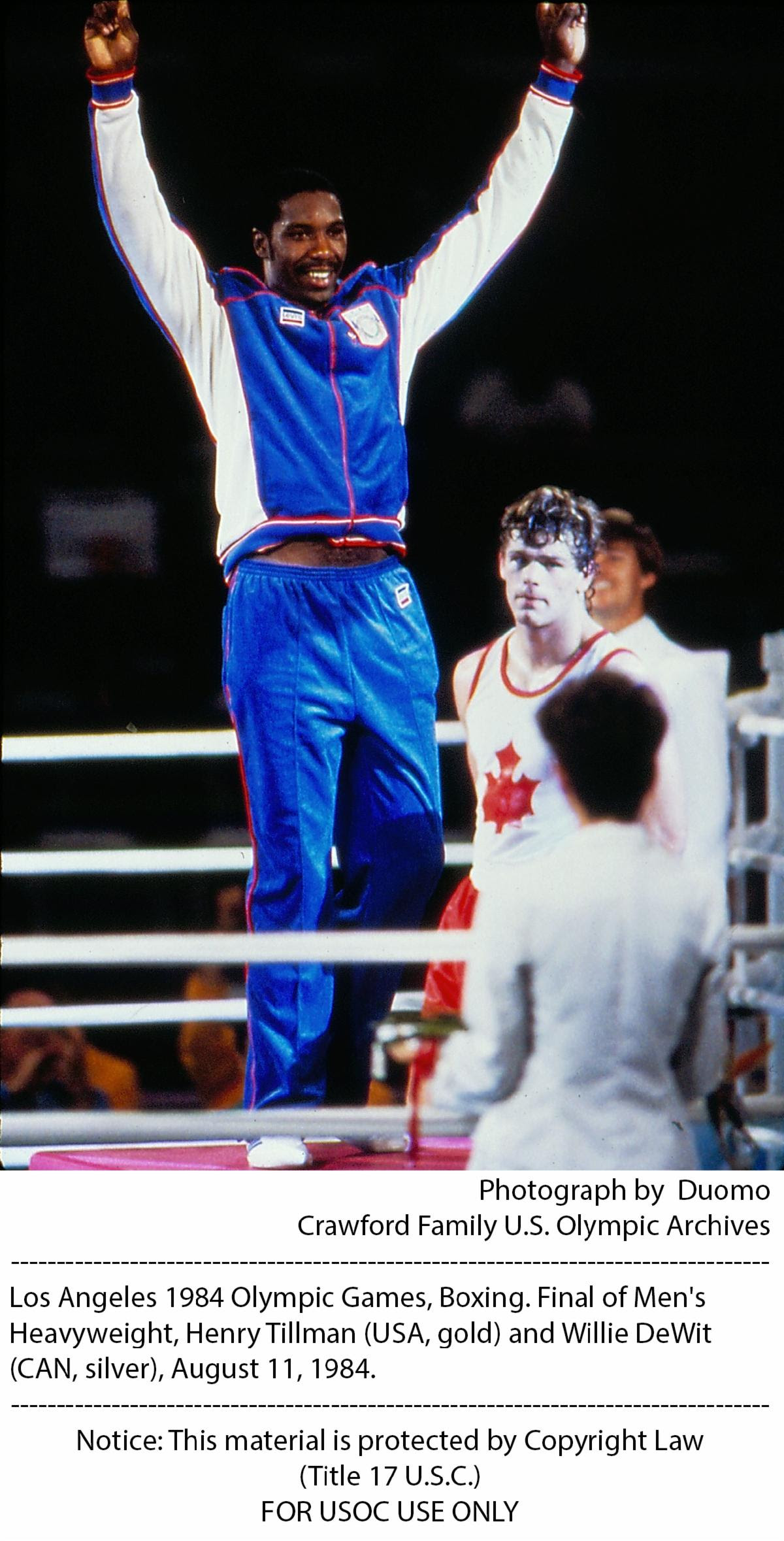 Tillman is one of the few boxers to fight Tyson as an amateur and pro, defeating “Iron Mike” twice in the aforementioned amateur matches, and getting stopped by Tyson as a pro in 1990.

“Mike was a beast, period,” Tillman spoke about fighting Tyson as an amateur and pro. “He could fight at an early age. Some guys are great amateurs but didn’t do well as pros. It all depends on their styles and Mike’s was more suited for the pros.

Despite fighting at home, Tillman went into the championship final an underdog against his Canadian opponent, Willie de Wit, the No. 1 rated heavyweight in the world at that time.

“He was a colorful guy out of Canada who was favored to win,” Tillman noted. “We became good friends. He’s a successful criminal attorney today in Canada. He was a good athlete, played football as well, and had a tough mentality. He didn’t have to box. His parents owned the third largest gravel company in Canada. All he had to do was stay alive and takeover the business. But he was a warrior!” In 1990, de Witt won a rematch as a pro against Tillman by way of a 10-round decision.

Tillman also met his bride-to-be, Gina Hemphill, at the 1984 Olympics. The granddaughter of legendary athlete Jesse Owens, she carried the torch into the Los Angeles Coliseum during the opening ceremonies. They were married in 1987 among some of his Olympic teammates, family and friends.

“Winning the Olympic gold medal at home made was so special,” Tillman remembered. “My mother and father were there with a lot of my South Central friends. That really made it over the top special. I was the most unlikely to make it, but my mother and father kept me grounded.”

“Henry was not only a top-notch fighter, but he’s an extremely well-rounded individual who has so much to offer even during a short conversation,” said Chris Cugliari, USA Boxing Alumni Association Director. “He’s the quintessential USA Boxing Alumnus for our current generation of champions to learn from, and we’re proud of everything he has done for USA Boxing.”

Tillman, who fought as a cruiserweight, turned pro December 7, 1984 in Houston, registering a second-round technical knockout over Uriah Grant. He unsuccessfully challenged Holyfield in 1987 for the World Boxing Association (WBA) cruiserweight world title, getting stopped in the seventh round, and Henry retired in 1992 with a 25-6 (16 KOs) pro record.

Today, Tillman trains young boxers at his gym in Los Angeles, Henry Tillman Boxing Center. Henry also enjoys his 14th semester implementing fitness grants for high school kids who may not be athletic stars. “I test them for strength, agility, balance and flexibility,” Tillman remarked. “It’s a good feeling when a kid you worked with, years later, comes up to me and says, ‘thanks coach’.”

Henry Tillman has had a roller coaster-like life, including a few stints in prison, but he has his act together, in large part because of boxing.

“I’m still trying to make sense of the way my life went,” 59-year-old Tillman concluded, “I’m here for a reason and still learn every day. If it wasn’t for boxing, I’d probably be dead, in prison, on drugs, or a drunk downtown.”