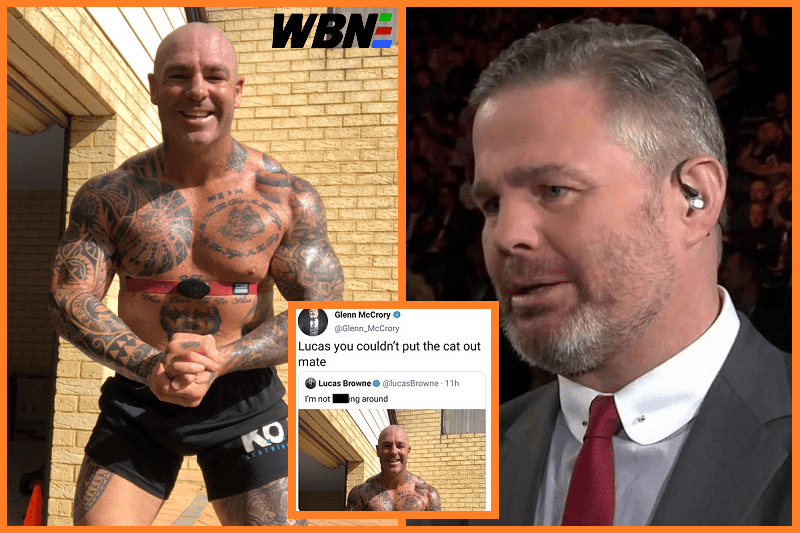 In a now-deleted post, McCrory replied to Browne’s own tweet stating, ‘I’m not f—ing around’ by telling ‘Big Daddy’ in no uncertain terms, ‘he couldn’t put the cat out’.

Browne responded to the obviously puzzling reply by saying: “Pull your head in, mate. Try and stay in your lane. But hey, it looks like you’re having trouble with that. Hahahaha, sad guy.”

McCrory, 55, then told Browne he’d have no trouble fighting him despite his advancing years.

Sometime later, 40-year-old Browne asked on his own account what was ‘the go’ with McCrory but there was nothing back from the ex-IBF cruiserweight title-holder.

By then, McCrory had removed his comment and simply shared Browne’s original offering.

A former sparring partner of Mike Tyson, McCrory retired way back in 1993.

During his career, the Newcastle man fought the likes of Lennox Lewis, Jeff Lampkin, and Alfred Cole.

For his part, Browne remains active in the sport and was on the verge of his American debut against Otto Wallin until the coronavirus outbreak hit.

Wallin had pulled out of the fight before Apti Davtaev then stepped in.

It’s hoped the original Wallin encounter can be salvaged once boxing resumes at some point later this year.

The Aussie was hoping to make up for two shocking knockout defeats suffered in the United Kingdom.

Unbeaten in March 2018, Browne lost to Dillian Whyte in six rounds when clearly not in his usual shape. Three wins later, and Browne headed back to London and was halted three rounds earlier by Dave Allen.

With the clock ticking on his career, Browne is bidding to make up for some previously lost time and secure another world title shot before retirement.