British light-heavyweight contender Anthony Yarde has revealed the sad passing of his father from COVID-19 this week.

Yarde, 28, revealed the tragic passing of his dad on social media and says the coronavirus killed him despite no previous health issues.

The Londoner, who challenged Sergey Kovalev for the world title last year, revealed his utter disbelief as he urged people to be responsible with isolation rules.

“I’m a very private person and (to be honest) I’m still in shock but maybe this can help people stay home,” said Yarde.

“My Dad passed away from this virus yesterday. He was fit with no health issues.

“The more people go out and mingle the longer this isolation will last and the more it will spread.

“I’m not a doctor. But I do know if you stay home you are less likely to catch it or pass it on. It’s seriously not worth the risk, he added. 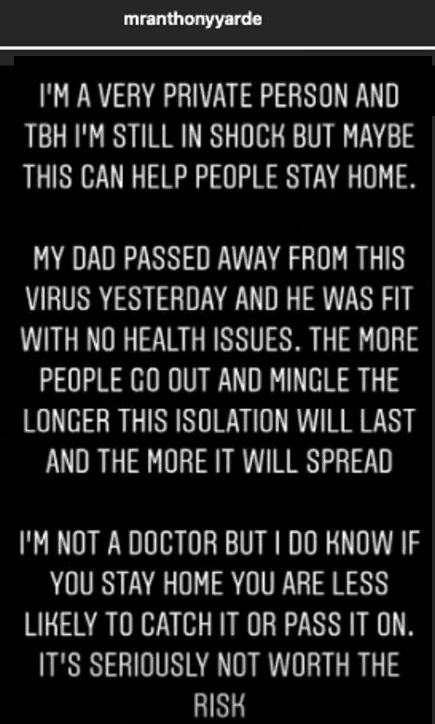 Promoter Frank Warren released a statement shortly after Yarde informed of his devastation, asking the public to follow instructions from the government.

“Frank Warren and everyone at Queensberry Promotions would like to express sincere condolences to Anthony Yarde and his family after the untimely passing of his father.

“Coronavirus is an issue affecting all of us. But that doesn’t make the individual casualties any less tragic.

“We hope that his fans listen to Anthony’s heartfelt plea for people to take the government’s advice seriously so we can try and minimize the suffering of others.”

At the time of writing this, the UK had over 17,000 cases of COVID-19. Yarde’s father was one of over a thousand UK deaths so far from the disease.

The epicenter has moved from Europe to New York in the United States. NYC has over 50,000 cases alone.

President Trump backtracked after considering a quarantine of the city as he plans to allow restrictions to be lifted by April 12.

For the UK, it seems a bleak few months is in store. Prime Minister Boris Johnson has warned there will be many more who pass away in the coming weeks and months.

It could June, at the earliest, before any isolation rules are relaxed.