The contest, penciled in for May 2, is almost certain to be rescheduled for June – at the earliest.

Despite this fact, Whyte will continue his preparations to defend his green and gold belt against the dangerous Russian.

Outlining his move, Whyte took to Instagram to update his fans.

“It’s quiet but there’s food on the shelves and I have a good set-up here,” said Whyte. “The mindset is my date is still going ahead, so I’m training.

“I had to drive 40 hours non-stop from my house straight to here. I drove because I brought the dogs with me, so I didn’t want to fly,” he added.

On why he chose not to break camp for a fight that won’t go ahead, ‘The Bodysnatcher’ stated: “It’s very important to show people at this time that it’s important to train.

“To get on with life the best you can in these kinds of situations. Because it is easy to panic and just shut down.

“I’m just trying to show as much positivity as I can.” 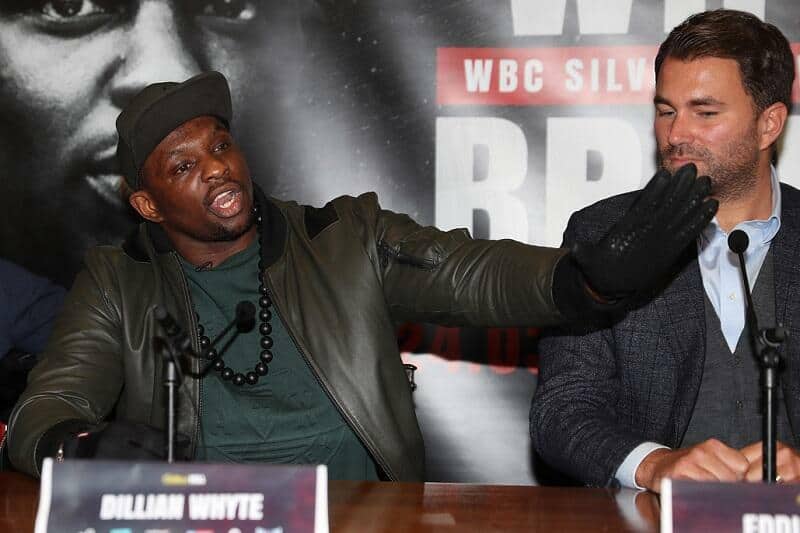 Whyte’s promoter Eddie Hearn had already stated over the weekend that the fight is likely to be pushed back due to coronavirus.

“May is going ahead (as things officially stand), but we also understand that we have contingencies in place to move Dillian Whyte to the middle of June.

“(Also) to move Derek Chisora-Usyk back into the end of June, early July. And of course, Anthony Joshua, who was due to go June 20, at Tottenham Hotspur football club,” Hearn told Sky Sports.

On Monday, the British Boxing Board of Control canceled all events up to just two days before the Whyte encounter.

A further decision on fights in May will be made soon.

“Following further Government and Medical Authorities advice the British Boxing Board of Control has decided that the suspension of Boxing Tournaments under the BBBofC jurisdiction remains in place until the end of April. Further consideration will then be given,” the BBBofC outlined.

“We will continue to follow the Government and the Medical Authorities advice and keep the situation under review.

“The BBBofC would like to emphasize our thoughts are with everyone affected by Covid-19.”