Frank Warren has questioned the motives of rival UK promoter Eddie Hearn after the Matchroom boss asked whether Tyson Fury could be stripped of the WBC title.

Warren was also critical of the way Hearn has handled Dillian Whyte as he number one contender with the World Boxing Council.

Whyte has been at the helm for over 800 days without a championship chance.

Recently, Hearn wondered whether Fury should be relieved of the green and gold strap as he awaits news from a UKAD investigation.

Accusations have been aimed at Fury from all angles since he regained the world heavyweight title against Deontay Wilder.

Clearly not happy with Hearn, Warren told the Essex man to get his own house in order before commenting on his business.

“Dillian Whyte’s promoter might be thinking he can nick the WBC heavyweight title for his man,” Warren said in his Daily Star column. “But let me tell you it won’t be happening.

“This week Eddie Hearn has come out and said Whyte will be ‘looking’ at Tyson Fury’s situation. 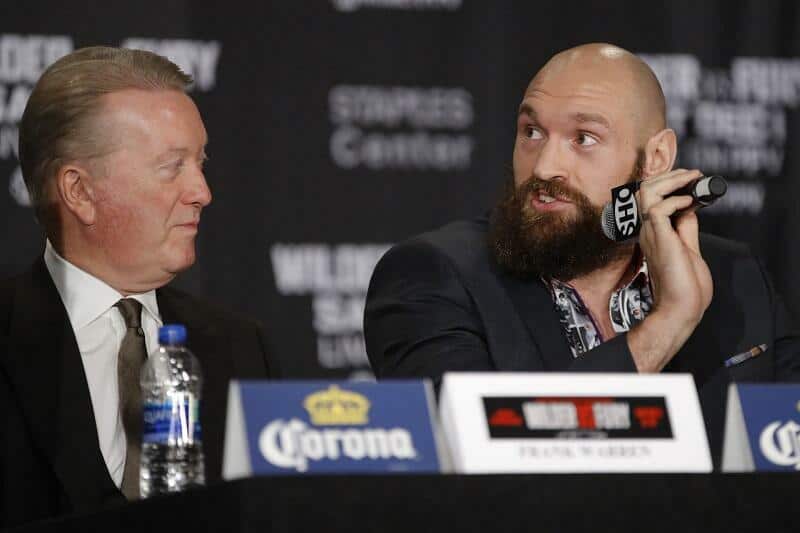 “It comes after outrageous allegations were made against the current WBC champion in a newspaper interview last weekend.

“As I said then, I don’t expect UK Anti-Doping to take the matter any further.

“But what is Hearn’s game coming out with those comments? – Is he trying to steal the title for Whyte?”

On Whyte being continually bypassed for a shot at the WBC belt and now Hearn aiming for Anthony Joshua to leapfrog him to face Fury, Warren added: “Why didn’t Hearn get his man a shot at the belt while he was in the No.1 position for so long?

“Is he now trying to get Whyte an easy shot at the title?

“That’s what happened for Anthony Joshua who picked up the IBF title by beating Charles Martin instead of having to beat the real best in the division.”

The argument is set to run until UKAD finally makes a decision of what kind of punishment, if any, Fury could face.

It comes after sensational accusations were aimed at Fury by a Sunday tabloid newspaper last week.

Since defeating Wilder on February 22nd, it’s been open season on Fury despite mental anguish the last time similar happened in 2015.