Marcos Maidana waits years for comeback, now has to pause a little longer

World Boxing News has been informed that the forthcoming return of pound for pound star Marcos Maidana will have to wait a little longer.

As with everything in the world at this moment, boxing is secondary to public health. Maidana’s scheduled comeback, set to happen on April 18, if off…for now.

Maidana and his team have promised to reschedule as soon as possible.

Chino Promotions said: “‘Chino’ Maidana Promotions inform you that due to the events that the world is going through due to the pandemic caused by the coronavirus and abiding by the rules of the different sports organizations, our event called: “THE RETURN OF MARCOS EL CHINO MAIDANA”, scheduled for April 18, 2020 in Tecnopolis Buenos Aires Argentina, is postponed.

“A new date that will be announced at the time.

“Our supportive and respectful company is folded to this difficult time. Surely, together we will overcome this and give it a knockout.

“We thank the press for their interest and cooperation.” 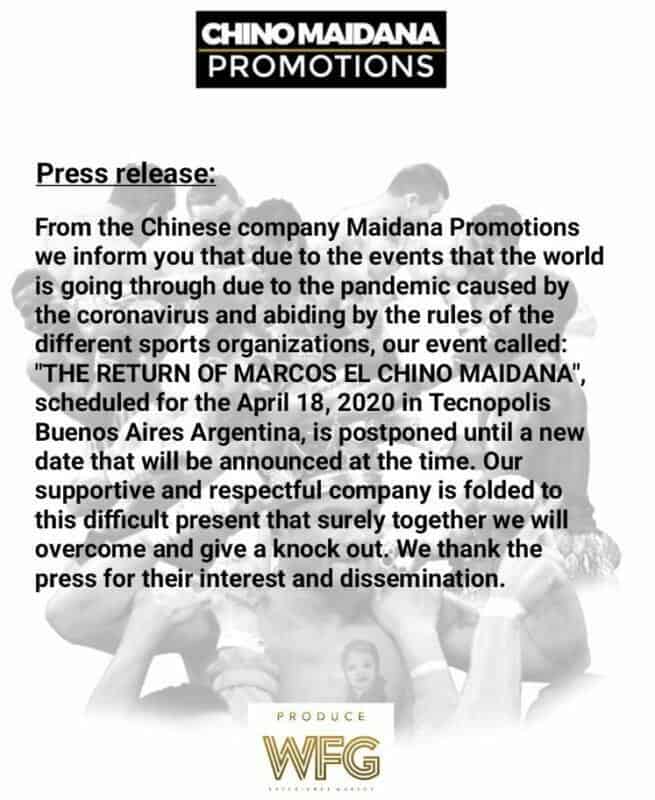 The 36-year-old was due to battle kickboxer Jorge Cali in what would be his first combat since 2014.

Back then, Maidana fought Floyd Mayweather twice before walking away from the sport with a suitcase full of cash at the age of 31.

An attempt to make a full return to professional boxing was called off last year. The Argentine then began losing weight for an exhibition.

Many believe that because the shape Maidana has whipped himself into for the Cali exhibition, the veteran may reconsider his decision.

But he has to get over the first hurdle. And due to the ongoing situation and current climate, it could be June or July until fans get the chance to gauge where Maidana is at.

Powers made be only slightly faded as Maidana is still relatively young. He also didn’t take much punishment during his career.

Who knows, Al Haymon’s original offer may still stand if Maidana looks good over the summer.