World Boxing News officially launched on August 1 of 2010. Just as Khan was possibly enjoying the best twelve months of his career.

Having already beaten Paulie Malignaggi at Madison Square Garden in May of that year, Khan took on the formidable Marcos Maidana in December.

The Mandalay Bay contest in Las Vegas was an instant classic. Khan and Maidana went hell-for-leather, and eventually, it was the Briton who prevailed by a tight margin.

With the win, Khan held a place just outside the WBN Pound for Pound Top 10 at number 13 and was nominated for the Fighter of the Year honor.

Beating off competition from the likes of Sergio Martinez and Manny Pacquiao, Khan took the spoils with the fans to become the first-ever recipient.

At the time, WBN was still in its infancy and actual prizes were not handed out until 2012. Therefore, Khan never received anything official…until now.

WBN commissioned a special replica trophy for Khan, who posed with pride at finally being handed it this week. 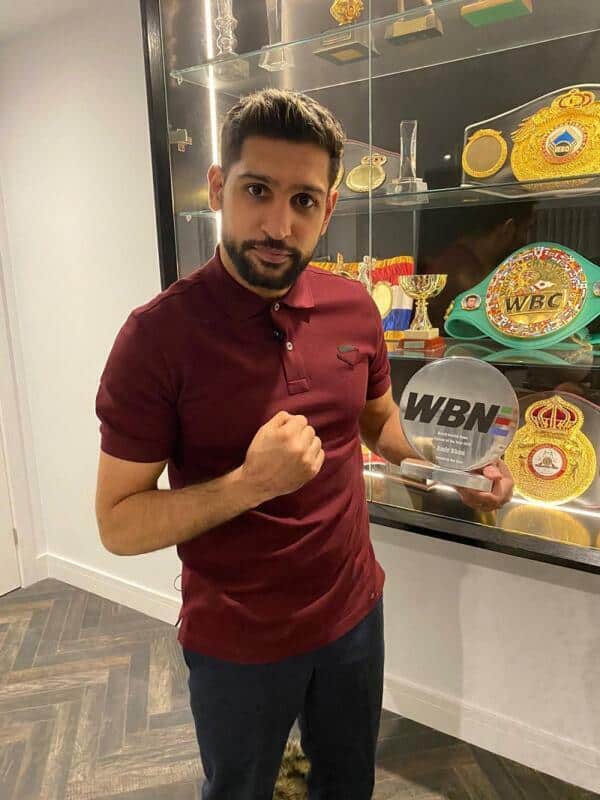 The Bolton man said the award would now be displayed alongside his clutch of title belts in a cabinet at home.

“I’m honored to receive the World Boxing News Award for Fighter of the Year 2010. Even if it was a few years ago,” chuckled Khan exclusively to WBN.

“I love it. It’s been so long. I forgot I actually won it!

“But it’s amazing and it will go with all my titles. I’d like to say thank you to Phil and all at WBN for the trophy.”

Khan is expected to be back in the ring over the coming months having got back in the win column last summer.

A victory over Billy Dib was the 34th of ‘King’ Khan’s career. His next bout will the 40th professional outing of a distinguished ring stint.

Recently becoming a father for the third time to new son Muhammad, Khan will be hands-on until beginning another training camp in the coming weeks.