Doors on the night of the event will open at 6:30 p.m. ET with the first bell at 7:00 p.m. ET. The Showboat Atlantic City is located at 801 Boardwalk, Atlantic City, NJ 08401. More information can be found on their website, www.ShowboatHotelAC.com.

Fighting out of the talent-laden region of Accra, Ghana, world-ranked lightweight Emmanuel “The Gameboy” Tagoe (31-1, 15 KOs) will seek to keep his remarkable winning streak intact, facing Rey “The Technician” Perez (24-11, 8 KOs), of North Hollywood, CA, by way of Sindangan, Zamboanga del Norte, Philippines, in the 10-round main event. Tagoe has won 31 fights in a row since his lone defeat in his 2004 pro debut.

Ranked #2 by the WBO, #6 by the IBF, and #10 by the WBC, Tagoe will be fighting in the United States for the first time in seven years. Most recently, the heavy-handed Ghanaian knocked out Ishmael Aryeetey in the sixth round, on July 20, 2019, in Accra. He also holds victories against former world champions Moses Paulus and Mzonke Fana.

Said Tagoe manager, Peter Kahn, “Emmanuel has been in camp in Florida for four months away from home in Ghana, away from his family. He has been working hard, he’s in excellent condition and ready to fight on March 19 in Atlantic City. As the WBO #2 rated lightweight in the world, Emmanuel is in line for big fights in 2020.” 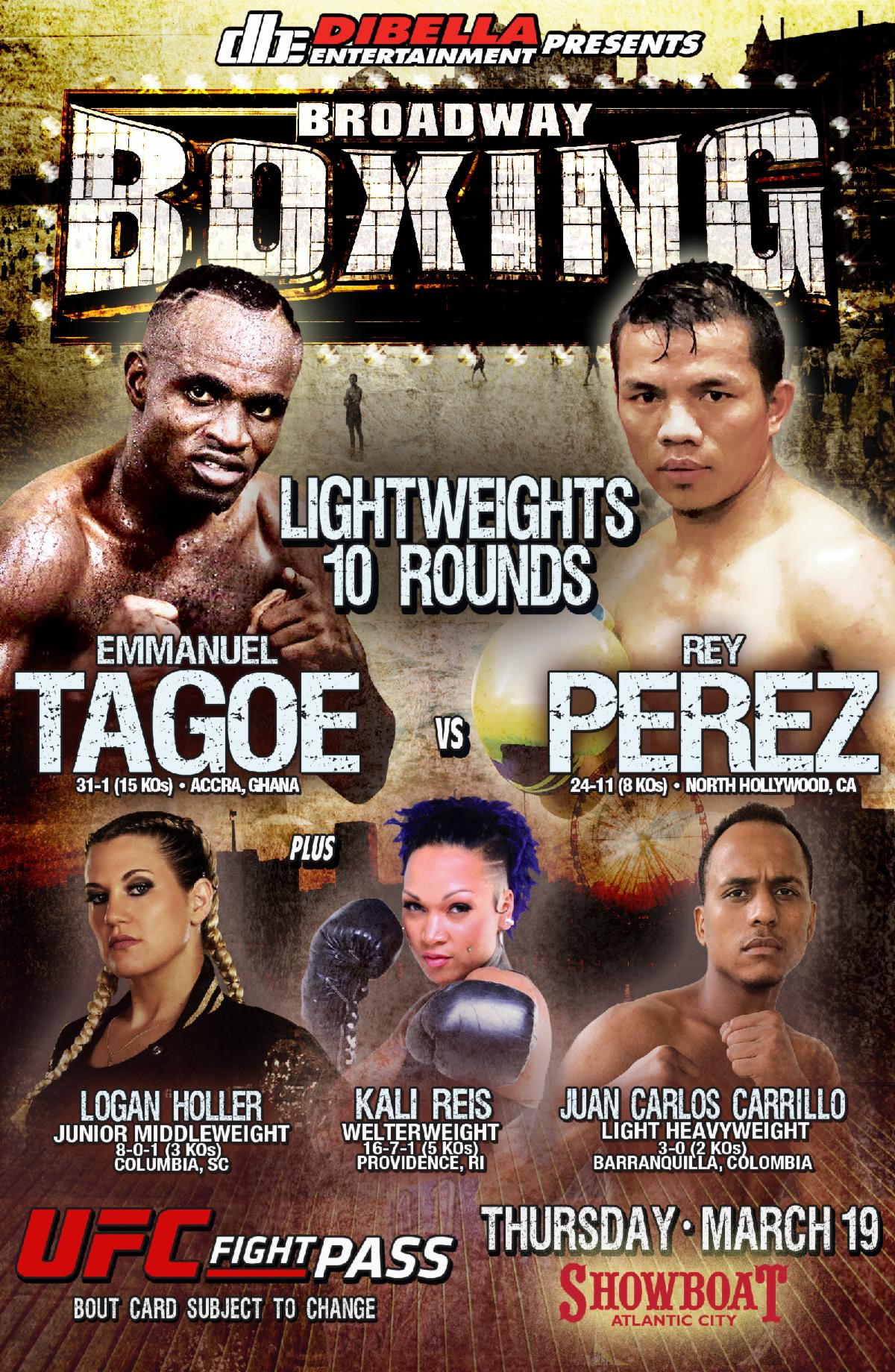 The 30-year-old Perez hits the ring following a hard-fought decision loss to undefeated contender George Kambosos on January 19, 2019, in Las Vegas. Perez has been tested against solid opposition throughout his 11-year career, facing Jessie Magdaleno, Lamont Roach, Chris Avalos and Oscar Duarte. Prior to the loss against Kambosos, Perez stopped Christian Gonzalez in the seventh round on October 18, 2018, in Los Angeles, CA.

The co-feature will have former world champion Kali “KO Mequinonoag” Reis (16-7-1, 5 KOs), of Providence, RI, fighting in a scheduled eight-round welterweight bout. Since challenging undisputed champion Cecilia Braekhus in May of 2018, Reis has won three consecutive fights, including a six-round decision on August 29, 2019, against Patricia Juarez.

Exciting female junior middleweight prospect and newly signed to DiBella Entertainment, Logan Holler (8-0-1, 3 KOs), of Columbia, SC, clashes with Leslie Pope (4-1, 3 KOs), of Kansas City, MO, in a six-round bout. Fighting for the first time in 2020, the former star college athlete Holler has moved her training to South Florida, where she is guided by Javiel Centeno in a camp alongside Tagoe and Kambosos. She is looking to bounce back following the only blemish on her record; a six-round majority draw to Bertha Aracil on February 23, 2019.

Rounding out the card, undefeated light heavyweight contender Dusty Harrison (34-0-1, 24 KOs) will compete in an eight-round bout. The 25-year-old Washington D.C. resident is currently riding a five-bout winning streak against top-level competition. Most recently, he knocked out Les Sherrington in the second round on February 8, 2020, in Vienna, Virginia. The Harrison bout is presented in association with Lee Baxter Promotions.