Marcos Maidana has been warned off facing Manny Pacquiao despite losing 25 plus kilograms in weight for his first fight in over five years.

‘El Chino’ is ready for a comeback to the ring on April 18th when the former world champion returns for an exhibition match-up against Jorge Acero Cali.

The former two-weight world ruler is back in shape and could feature in further contests dependent who his encounter with kickboxer Cali goes down.

Obviously, in an attempt to drum up support for his forthcoming contest, Chino Promotions posed a massive battle opposite Pacquiao to fans.

“Manny Pacquiao plans to return to the ring in July 2020 and is currently analyzing a list of possible opponents. Against who would like to see Pacquiao?” – said Maidana’s promotional outfit.

The response was mixed, to say the least.

“Pacquiao kills you! Maidana, I am your fan but you have no chance if you fight Pacquiao,” said one. 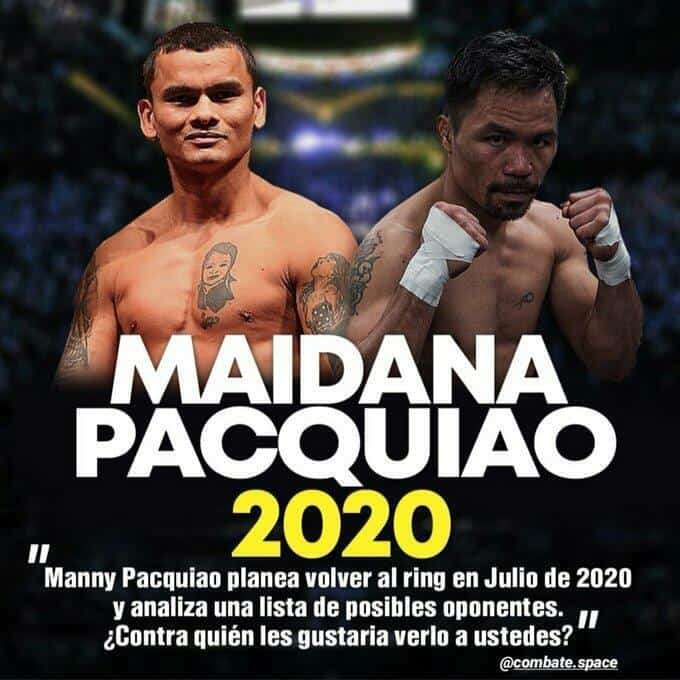 Others stated: “It’s a very difficult that fight and even more with the withdrawal time you have had, Maidana. Look at the ease that Pacquiao beat Lucas Matthysse.”

“Already the time of Maidana has passed. The fighter has a lot of weight on (from when he fought before). That would make him too slow next to Pacquiao.

“Maidana vs Pacquiao? – Unless it is in a light-heavyweight fight I don’t see it. Maidana is not going down to 147 lbs.”

As well as the negative responses, there were the odd one or two positive ones to add to the mix.

“I hope Maidana vs Pacquiao happens. It would be a privilege to see two great fighters in the ring,” said a clear fan of the collision, which could have taken place back in 2011.

A second view read: “It’s a complicated fight for ‘Chino’-  but it would be a great show!”

Despite claiming his best victories in some time last year, Pacquiao has been out of action ever since.

Winning the WBN Fighter of the Year Award, Pacquiao hasn’t fought since last July and looks likely to be out for at least a year before his next bout actually takes place.

A rumored Floyd Mayweather rematch has so far failed to materialize.