Murphys Boxing is proud to announce the full line up for their 5th Annual St. Patrick’s Day Clash which will take place on Saturday, March 14th once again at the House of Blues in Boston.

Headlining the already near sold out event will be New Haven, Connecticut’s Charles Foster (19-0, 8 KOs). Foster, the current NABA Light Heavyweight Champion will defend his title against Mexico’s Manuel Ceballos (17-2, 11 KOs) in a 10 round bout.

Foster, who has been quietly climbing the ranks while putting on a series of flawless performances on platforms like Showtime and UFC Fight Pass over the past two years, is now ranked #4 in the world by the WBA and ready to fight for a world title in 2020.

“It’s been a childhood dream of mine to reach this level of the sport.”, explains the soft spoken and humble 29 year old southpaw.

“It’s surreal to think that I’m ranked in the Top 5 and in a position to fight for a world title. It does keep me humble and focused though knowing I’m so close. It makes me work that much harder in the gym. I know I need to make a real statement on March 14th to get one of the top tier light heavyweights in the ring with me for a title or for a title eliminator.”

“This is my second time fighting on a Murphys Boxing St. Patrick’s Day card. It’s a wild energy from the crowd. Fighting on stage with the audience looking up at you like a concert is amazing. It was easily my favorite venue and event of all my pro fights and I’m really excited to be part of it again.”

In the first of the dual co-main events, it’s a bona fide Irish grudge match when Islandeady, Ireland native and Murphys Boxing’s own Ray Moylette (11-1, 4 KOs) takes on Clones, Ireland’s Larry Fryers (11-2, 4 KOs), who now lives and fights out of New York City.

The two prospects, with their nearly identical records, were scheduled to face each other this past summer but visa issues prevented Moylette from entering the country just days before the fight which created a friction between the two fighters.

Now ‘Sugar’ Ray and ‘Lethal’ Larry, who have each been each adopted by the rival sports cities of Boston and New York, will settle their differences in the ring on St. Patrick’s Day weekend with the New England Lightweight Title on the line in an 8 round bout. 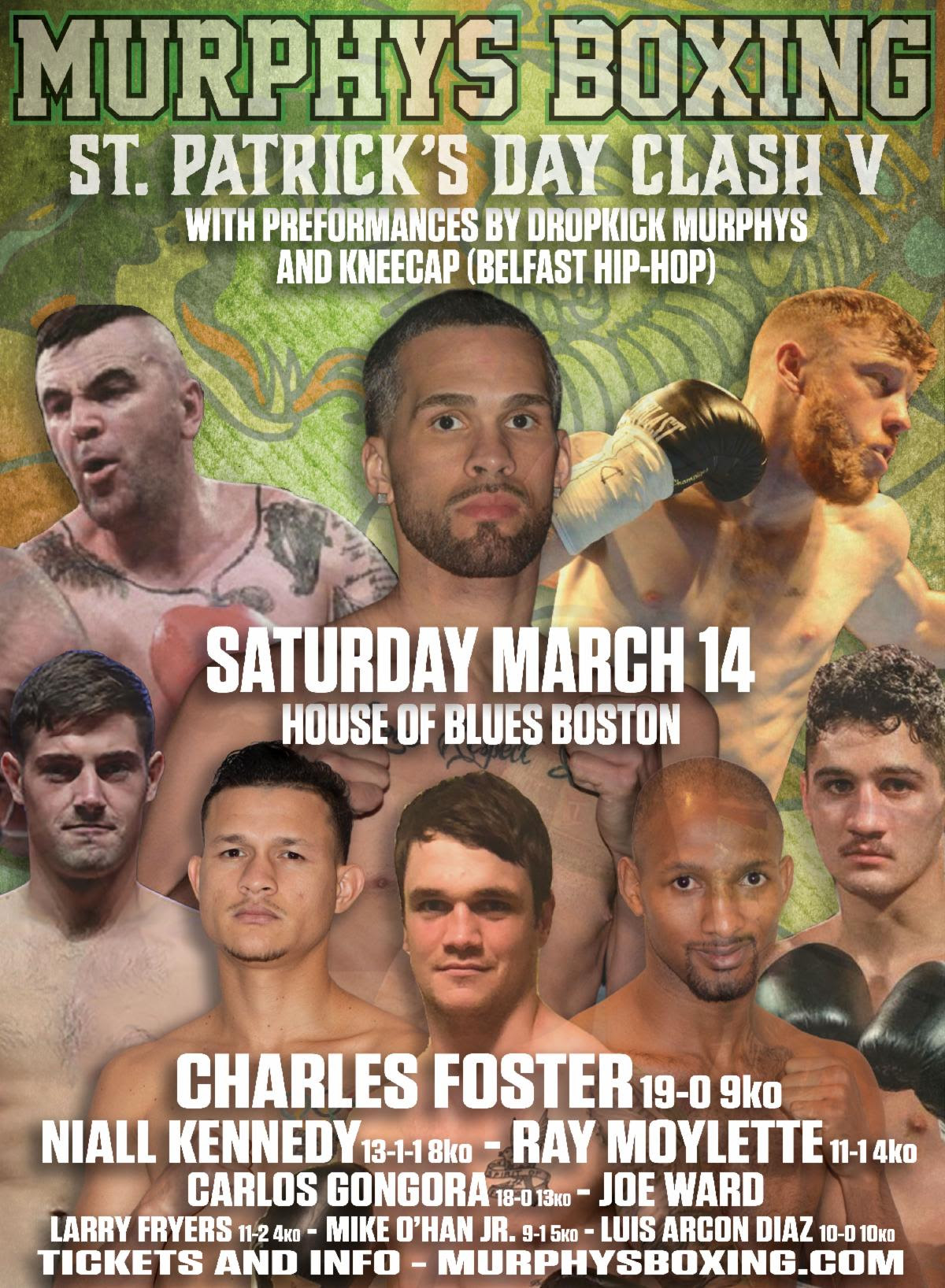 Kennedy is coming off his first loss this past summer when he was upset by USA Olympian, Devin Vargas in a back and forth brawl. Despite the setback, the big man from Gorey, Ireland will not face a soft touch in his comeback fight as he takes on the heavy handed North Carolina brawler, Don Haynesworth (16-3-1, 14 KOs) in an 8 round bout.

Kennedy, who is a police officer in his hometown, has been become a fan favorite in Boston having fought almost his entire professional career in the New England area including several past appearances at the annual Murphys Boxing holiday event.

The Clash will also feature a sensational undercard of local and international fighters including:

Murphys Boxing’s Carlos Gongora (18-0, 13 KOs), an Ecuadorian Olympian and the #13 ranked middleweight in the world who will face Argentina’s Gonzalo Coria (16-3, 6 KOs) with the WBC Fecarbox Title on the line in a 10 round middleweight bout.

Last but not least, the night will be kicked off by the east coast debut of Oxnard, California’s, Danny Robles (2-0-1, 2 KOs), who has displayed unnatural power in his first 3 professional fights. ‘The Dawg’ will take on Framingham, Massachusetts’ Jader Alves de Oliveira, an MMA veteran who will be making his professional boxing debut in the 4 round super featherweight contest.

“The St. Patrick’s Day Clash is my favorite promotion of the year and one that our fighters and fans really look forward to.”, explains, Murphys Boxing founder and Dropkick Murphys frontman, Ken Casey.

“The atmosphere that’s created when you put boxing on in a general admission, standing room only concert venue, let alone on St. Patrick’s Day weekend in Boston, creates a unique and intense experience.”

As for the incredibly busy and successful year the promotional company is coming off of, Casey, who will also play 5 consecutive shows with Dropkick Murphys throughout Boston during St. Patrick’s Day week, including an acoustic set in ring on fight night, is even more excited about what the new year holds for Murphys Boxing.

“2020 is just getting started and it’s already been an amazing year for Murphys Boxing. First we had Spike O’Sullivan in the year’s first high profile fight, when he went up in weight to face Jaime Munguia at the Alamodome. Spike made it an exciting war that already has him in line for a title shot back in the junior middleweight division.

“Then of course just last month, Mark DeLuca, one of our most popular fighters, traveled to Kell Brook’s hometown and put on a gutsy performance in what was a massive event in the UK. That fight earned Mark a lot of new fans and opportunities. In 2020, we’re expecting two of our Top 10 ranked fighters, Charles Foster and Abraham Nova to fight for, and win, world titles and we also plan on putting our undefeated prospects like Carlos Gongora, Luis Arcon Diaz and William Foster III in position to enter the world rankings.”