Golden Boy vs Matchroom: Annual DAZN competition would be subscriber-friendly

As DAZN continue their push to reach an ambitious subscriber target, WBN offers a massive annual crossover event pitting their two major promotional outfits against each other.

Yet to be mulled over by DAZN bosses, as far as we know, matching Golden Boy Promotions with Matchroom Boxing once a year could be huge, by all accounts.

Both hold an impressive roster of fighters. Therefore, why not stage a fan-friendly annual showcase of in-house fighters.

An eight-fight card, possibly of four top-line bouts and four featuring some of each stable’s prospects, could even be staged on a Canelo undercard.

Throw in a points-system competition for good measure, alongside a coveted trophy to the winners. Namely, the DAZN Championship or Cup.

Even if Canelo chooses an alternative foe other than someone at Matchroom, the tournament would still be viable on a Vegas card. Alternatively, put the show on in a stand-alone capacity.

One point for a victory and two points for a KO would negate the chances of a draw to very slim. Whilst counting the totals after each bout ensures excitement throughout.

Mix up the divisions to include as many as possible and nominate team captains prior to the kick-off.

Each captain, in cohesion with their respective promoter, picks the order of bouts as they happen.

It could be a real hit.

DAZN would be ground-breakers in this kind of high-profile offering between two well-known promoters in their field.

An example of one stronger tournament, with Canelo as a headliner, can be found below.

Whether it happens or not would simply be down to DAZN executives instigating a meeting between Golden Boy’s Eric Gomez and Matchroom’s Eddie Hearn.

It has been teased before by DAZN, although nothing came of the social media post. 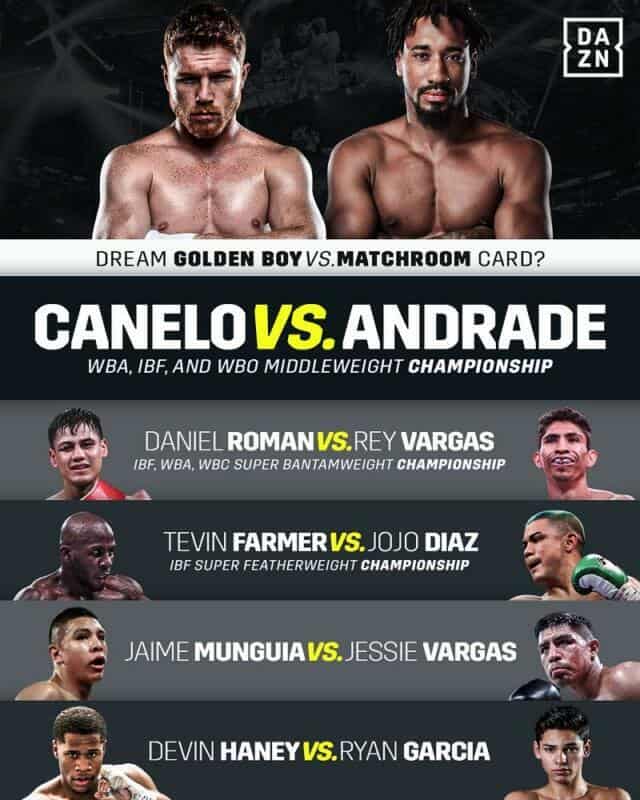 There’s no reason even a trial event with lesser-profile competitors couldn’t be tested in order to gauge interest.

A gap in the marker definitely exists for some sort of tournament format, and who wouldn’t want to see two established companies pit their wits in combat?