In the junior-middleweight semifinal, Isaiah Wise (7-2-2, 4 K0s), of North Philadelphia, who always brings out a great crowd, will face Enver Halili (10-2, 3 K0s), of The Bronx, NY in a six-round bout. The Wise and Halili fight is sure to be a crowd-pleaser.

In an old school, all-Philly matchup, fans will see Sheldon Deverteuil (2-0-2) against Christopher Burgos (2-4-1) in a four-round super lightweight bout. 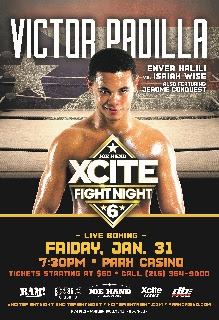 Shahkzod Atoev, a native of Samarqand, Uzbekistan now residing in Philadelphia, will make his super-featherweight pro-debut against Juan Ibarra (0-2) of Willow Springs, NC.

Tyhler Williams (3-0, 2 K0s), a growing Philadelphia favorite, will make his fourth appearance against an opponent to be named.